The power of the unaided mind is highly overrated… The real powers come from devising external aids that enhance cognitive abilities. —Donald Norman

Algorithms are a fascinating use case for visualization. To visualize an algorithm, we don’t merely fit data to a chart; there is no primary dataset. Instead there are logical rules that describe behavior. This may be why algorithm visualizations are so unusual, as designers experiment with novel forms to better communicate. This is reason enough to study them.

But algorithms are also a reminder that visualization is more than a tool for finding patterns in data. Visualization leverages the human visual system to augment human intellect: we can use it to better understand these important abstract processes, and perhaps other things, too.

This is an adaption of my talk at Eyeo 2014. A video of the talk is available on Vimeo. (Thanks, Eyeo folks!)

Before I can explain the first algorithm, I first need to explain the problem it addresses.

Light — electromagnetic radiation — the light emanating from this screen, traveling through the air, focused by your lens and projected onto the retina — is a continuous signal. To be perceived, we must reduce light to discrete impulses by measuring its intensity and frequency distribution at different points in space.

This reduction process is called sampling, and it is essential to vision. You can think of it as a painter applying discrete strokes of color to form an image (particularly in Pointillism or Divisionism). Sampling is further a core concern of computer graphics; for example, to rasterize a 3D scene by raytracing, we must determine where to shoot rays. Even resizing an image requires sampling.

Sampling is made difficult by competing goals. On the one hand, samples should be evenly distributed so there are no gaps. But we must also avoid repeating, regular patterns, which cause aliasing. This is why you shouldn’t wear a finely-striped shirt on camera: the stripes resonate with the grid of pixels in the camera’s sensor and cause Moiré patterns. 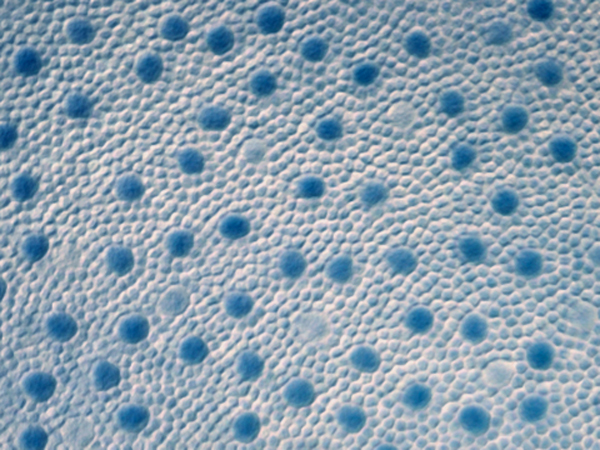 The human retina has a beautiful solution to sampling in its placement of photoreceptor cells. The cells cover the retina densely and evenly (with the exception of the blind spot over the optic nerve), and yet the cells’ relative positions are irregular. This is called a Poisson-disc distribution because it maintains a minimum distance between cells, avoiding occlusion and thus wasted photoreceptors.

Unfortunately, creating a Poisson-disc distribution is hard. (More on that in a bit.) So here’s a simple approximation known as Mitchell’s best-candidate algorithm.

You can see from these dots that best-candidate sampling produces a pleasing random distribution. It’s not without flaws: there are too many samples in some areas (oversampling), and not enough in other areas (undersampling). But it’s reasonably good, and just as important, easy to implement.