Life as a drone operator: ‘Ever step on ants and never give it another thought?’

When Michael Haas, a former senior airman with the US air force, looks back on the missions he flew over Afghanistan and other conflict zones in a six-year career operating military drones, one of the things he remembers most vividly is the colorful language airmen would use to describe their targets. A team of three would be sitting, he recalls, in a ground control station in Creech air force base outside Las Vegas, staring at computer screens on to which images would be beamed back from high-powered sensors on Predator drones thousands of miles away.

Analysis Drones may predate Obama, but his resolute use of them is unmatched

Civilians have been killed and officials warn it will ‘weaken the rule of law’, yet the president’s actions indicate drone warfare won’t be going away anytime soon

The aim of the missions was to track, and when the conditions were deemed right, kill suspected insurgents. That’s not how they put it, though. They would talk about “cutting the grass before it grows out of control”, or “pulling the weeds before they overrun the lawn”.

And then there were the children. The airmen would be flying the Predators over a village in the tribal areas of Pakistan, say, when a series of smaller black shadows would appear across their screens – telling them that kids were at the scene.

They called them “fun-sized terrorists”.

Haas is one of four former air force drone operators and technicians who as a group have come forward to the Guardian to register their opposition to the ongoing reliance on the technology as the US military’s modern weaponry of choice. Between them, the four men clocked up more than 20 years of direct experience at the coalface of lethal drone programs and were credited with having assisted in the targeted killings of hundreds of people in conflict zones – many of them almost certainly civilians.

As a senior airman in the 15th reconnaissance squadron and 3rd special operations squadron from 2005 to 2011 – a period straddling the presidencies of George W Bush and Barack Obama – Haas participated in targeted killing runs from his computer in Creech that terminated the lives of insurgents in Afghanistan almost 8,000 miles away. He was a sensor operator, controlling the cameras, lasers and other information-gathering equipment on Predator and Reaper drones as well as being responsible for guiding Hellfire missiles to their targets once the pilot sitting next to him had pulled the trigger.

Haas, a 29-year-old, in a Notre Dame baseball cap and Chicago Blackhawks ice hockey jersey, looks too youthful to be burdened by such enormous issues. Yet the existential sensation of killing someone by manipulating a computer joystick has left a deep and lasting impression on him. “Ever step on ants and never give it another thought? That’s what you are made to think of the targets – as just black blobs on a screen. You start to do these psychological gymnastics to make it easier to do what you have to do – they deserved it, they chose their side. You had to kill part of your conscience to keep doing your job every day – and ignore those voices telling you this wasn’t right.” 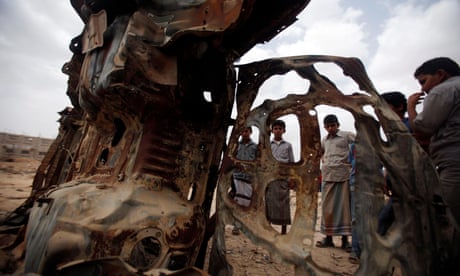 Haas was relatively lucky, in that his team directly launched only two missile strikes during his 5,000 hours of drone flying. The first of those incidents, in January 2011, involved a group of insurgents in Helmand province, Afghanistan, who were exchanging gunfire with US troops on the ground and were duly eviscerated. “No-doubters”, the targets were called in the cold vocabulary of the military drone business, indicating certainty about their enemy status. Such certainty rarely existed, Haas said.

He has also been spared the burden of knowing the overall number of killings in which he played a part as a cog in the wider machinery of drone warfare. When he left the air force, Haas was given a report card that revealed the tally, but he chose to ignore it.

“They handed me a closed envelope with the number in it, but I never opened it. I didn’t want anything to do with it,” he said.

Brandon Bryant, a staff sergeant who worked with US air force Predator drones between 2005 and 2011 as a sensor operator and imagery analyst, did not get away so lightly. He knows for a fact – he saw it on his screen – that he was directly involved in the deaths of 13 people in five separate Hellfire strikes, one in Iraq and the rest in Afghanistan.

Bryant, 30, his head shaved and tattoos covering the backs of his hands, carries himself like a leader and seems to be driven by a determination to own a personal responsibility for the drone campaign he was involved in for five years and five days.

His first “shot”, as the former drone operators call the strikes, was in Afghanistan, where Bryant helped guide in F-16 fighter aircraft to kill three individuals who he was told were reinforcements coming to join anti-US Taliban forces. But when he “got eyes” on the targets, it was obvious to him from their body movements – they were hunkering down, gesturing, looking around – that they were terrified, suggesting to him that they were unlikely to be trained fighters.

After the strike was completed, when Bryant was back with his squadron, there were high-fives all round. He was celebrated for having “popped his cherry” – he had broken his drone virginity with a killing.

In the fourth of the Hellfire strikes in which Bryant directly participated, his team was called in to take out a group of five tribal individuals and their camel who were travelling through a pass from Pakistan to Afghanistan. They were said to be carrying explosives for use in attacks on US troops.

Bryant, together with a pilot and mission coordinator who formed the other two members of his team, tracked the group for several hours from their computers outside Las Vegas. They flew the Predator drone out of sight and beyond earshot of the targets at about 20,000 feet and a distance of about four nautical miles from the group on the ground.

He was puzzled during that time, because there was no sign of any weapons on the men or in the baggage carried by the camel. The drone team patiently waited for the men to descend the valley and bed in for the night, before they let rip with the Hellfire. Even then, there were no secondary explosions, which made Bryant think that his hunch had probably been right – five men and a camel had been reduced to dust for no apparent reason.

“We waited for those men to settle down in their beds and then we killed them in their sleep. That was cowardly murder,” he said.

These direct incidents were harrowing enough for Bryant. But then, when he was honorably discharged from the air force in 2011, he made the mistake of doing what Haas had refused to do: he opened the envelope with the report card in it that itemized the number of killings in which he had played some assisting role.

The impact of such knowledge, and the myriad other stresses of sitting in a tin box in Nevada tracking individuals for potential assassination on the other side of the globe, has taken a heavy toll on Bryant and other drone operators. Studies have found similar levels of depression and PTSD among drone pilots working behind a bank of computers as among military personnel deployed to the battlefield.

The psychological effect can hit personnel in unexpected ways. Cian Westmoreland was a senior airman based at Kandahar Air Field in Afghanistan, working as a technician to set up the communications infrastructure that acts as the backbone of the drone system.

Though he never pulled the trigger or used a joystick to guide in missiles, the lethal nature of his work was driven home to him when his superior came to his unit one day and said: “We are killing bad guys now, boys.”

Westmoreland was troubled by the disclosure, and from 2009 to this day has been disturbed by recurring nightmares. “I’m in the radio unit flipping switches, with my boss yelling at me to get it up and running. Then all of a sudden it does start working and I realize with a jolt what I’ve done. I run out of the control station and now I’m in a village in Afghanistan and the whole place is burnt out and there’s a woman on the ground covered in soot and a child crying over her. I go up to help the child, but half of her face is blown off and there’s nothing I can do.”

The four former drone operators who talked to the Guardian described the various ways in which they and their peers would try to cope during shifts of up to 12 hours. Airmen would show up to the control station drunk; others would sleep on the job, read comic books or play video games on their secure computers.

Despite the load they were carrying, they were disparaged within the wider air force. “We were looked down upon, because we were wearing flight suits but not sitting in the cockpit of an actual aircraft. Drones were like a joke in the military,” Bryant said.

Toward the end of his service, Haas switched to training new recruits in the technology of drone warfare. That shocked him anew, as he discovered that many of the younger intake were gung-ho about the power they wielded at their fingertips. “They just wanted to kill,” he said.

He remembers one training session with a student in which they were flying live over Afghanistan. The student said that a group of people on the ground looked suspicious.

Why? Haas asked. Because they look like they are up to no good, the student replied.

Would you act on that? the instructor asked. Sure, the student said.

Haas immediately pulled him from his seat, took over the mission himself, and promptly failed the student. “I tried to get the students to understand that preservation of innocent life had to take priority.”

Because he failed the student, Haas was later rebuked by senior officers. They told him that they were short of bodies to keep the drones flying, and they ordered him to pass students in future so that there would be a sufficient number trained and ready to go.