A British Convert to Islam: ‘I found Qur’an mother of all philosophies’ 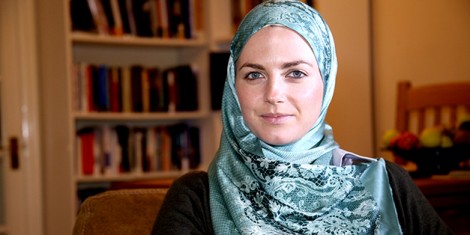 By Myriam Francois-Cerrah, who became popular when she was a child for acting in the 90s hit film ‘Sense and Sensibility.’ Now she is gaining more popularity for being one of a growing number of educated middle class female converts to Islam in Britain. She has recently contributed to a series of videos on Islam produced in the UK titled, “Inspired by Muhammad.”

I embraced Islam after graduating from Cambridge. Prior to that I was a skeptical Catholic — a believer in God but with a mistrust of organized religion.

The Qur’an was pivotal for me. I first tried to approach it in anger, as part of an attempt to prove my Muslim friend wrong. Later I began reading it with a more open mind.

The opening of Al-Fatiha, with its address to the whole of mankind, psychologically stopped me in my tracks. It spoke of previous scriptures in a way, which I both recognized, but also differed. It clarified many of the doubts I had about Christianity. It made me an adult as I suddenly realized that my destiny and my actions had consequences for which I alone would now be held responsible.

In a world governed by relativism, it outlined objective moral truths and the foundation of morality.
As someone who’d always had a keen interest in philosophy, the Qur’an felt like the culmination of all of this philosophical cogitation.

It combined Kant, Hume, Sartre and Aristotle. It somehow managed to address and answer the deep philosophical questions posed over centuries of human existence and answer its most fundamental one, ‘why are we here?’

In the Prophet Muhammad (peace be upon him), I recognized a man who was tasked with a momentous mission, like his predecessors, Moses, Jesus and Abraham (peace be upon them all).
I had to pick apart much of the Orientalist libel surrounding him in order to obtain accurate information, since the historical relativism which people apply to some degree when studying other historical figures, is often completely absent, in what is a clear attempt to disparage his person.
I think many of my close friends thought I was going through another phase and would emerge from the other side unscathed, not realizing that the change was much more profound.

Some of my closest friends did their best to support me and understand my decisions. I have remained very close to some of my childhood friends and through them I recognize the universality of the divine message, as God’s values shine through in the good deeds any human does.

I have never seen my conversion as a ‘reaction’ against, or an opposition to my culture. In contrast, it was a validation of what I’ve always thought was praiseworthy, while being a guidance for areas in need of improvement. I also found many mosques not particularly welcoming and found the rules and protocol confusing and stressful.

I did not immediately identify with the Muslim community. I found many things odd and many attitudes perplexing. The attention given to the outward over the inward continues to trouble me deeply.
There is a need for a confident, articulate British Muslim identity which can contribute to the discussions of our time. Islam is not meant to be an alien religion, we shouldn’t feel like we’ve lost all trace of ourselves. Islam is a validation of the good in us and a means to rectify the bad.
Islam is about always having balance and I think the Prophet’s (peace be upon him) message was fundamental about having balance and equilibrium in all that we do.

The Prophet’s message was always that you repel bad with good that you always respond to evil with good and always remember that God loves justice so even when people are committing serious injustices against you, you have a moral responsibility and a moral obligation in front of God to always uphold justice and never yourself transgress those limits.

Prophet Muhammad (peace be upon him) said: ‘Forgive him who wrongs you. Join him who cuts you off. Do good to him who does evil to you and speak the truth even if it be against yourself.’
Islam’s beauty really becomes to its own when it becomes manifest; and it becomes manifest when you make it into a tool for the betterment of society, human kind and the world.

The ideal from an Islamic perspective is for ethics to become living ethics, to become an applied body of values and not remain unfortunately as it often is cloistered somewhere which is some more divorced from reality.