Deqa Dhalac poses for a portrait at her home in South Portland in 2018. Of becoming the city’s mayor this week, she said, “I’m…really proud of the fact that I’m going to be opening a lot of paths for other folks who look like me.”

(CNN)Deqa Dhalac saw it in their faces when she started campaigning.Some people, she says, seemed scared to open their doors when she knocked. Others saw her hijab and assumed she didn’t speak English.But Dhalac kept knocking and telling her story.And she says a lot has changed since those days back in 2018, when she first ran for City Council in South Portland, Maine — and won. On Monday she became the first Black mayor of the small city on the state’s Southern Coast. And she’s believed to be the first Somali American mayor in the United States.South Portland’s other city councilors, who are all White, elected her in a unanimous vote, heaping praise on Dhalac for her dedication to the community and thoughtful consideration of issues.Dhalac, 53, says her election shows what can be accomplished when people find ways to connect with each other instead of putting up walls.Enter your email to sign up for the CNN Meanwhile in America Newsletter.close dialog

Want to understand American politics?We’ve got you.Sign Me UpNo ThanksBy subscribing you agree to ourprivacy policy.“People will always have some kind of reservation…but will get to know you, listen to you and see who you are through that,” she says.Given that Maine is the whitest state in the country, and that South Portland is 90% White, Dhalac knows her election sounds surprising to some.But she says that it shouldn’t be. And that’s one reason she ran for office in the first place.She hopes her election as mayor will inspire others to follow in her footsteps.”I’m…really proud of the fact that I’m going to be opening a lot of paths for other folks who look like me, especially our young community members, to say, ‘If this woman can do this, actually I can do that,'” Dhalac told the City Council last month after her nomination.”And also not only for immigrant, first-generation or Black people, but also young, White individuals who may have been afraid or don’t want to be a part of the civic duties that we all have. … I say, ‘Yes, if I can do this, yes, you can do it. We really, really need you, each and every one of you in this beautiful city of ours, to step up.'”

Dhalac’s inauguration is a milestone for Somali immigrant communities that have grown in size and become more established in states like Maine, Minnesota, Ohio and Washington. As that’s happened, more Somali Americans are taking on roles on local school boards and city councils — and also serving as lawmakers, like Rep. Ilhan Omar, D-Minnesota.Dhalac is the first Somali American mayor in the United States, according to New American Leaders, an organization that trains and encourages immigrants to run for office. But the organization says they hope she won’t be the last. 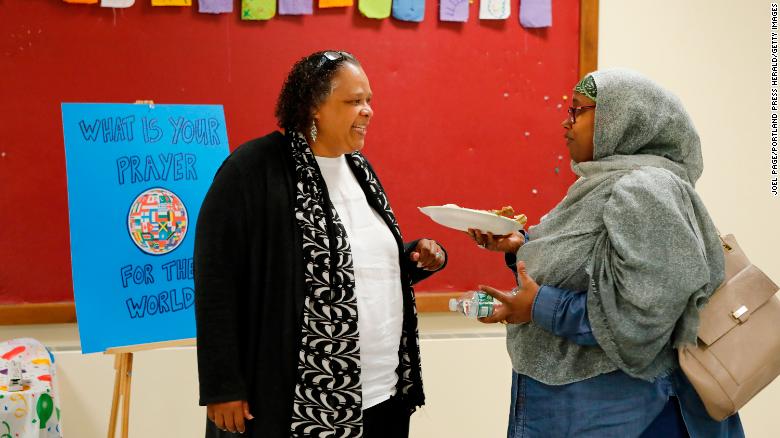 Regina Phillips, left, speaks with Deqa Dhalac, right, at an Eid-al-Fitr celebration on July 9, 2016, in Westbrook, Maine.”Her leadership will certainly make a big difference not only in South Portland, but around the country,” said Ghida Dagher, the organization’s president. “She’s going to serve an example for Somali Americans across the country to step up and step into their own leadership journey. … It’s about owning their own power and potential in our democracy.”Dhalac’s election is also a historic first for South Portland, which has never had a Black mayor before, says Seth Goldstein, vice president of the South Portland Historical Society.Goldstein, who teaches history and leads historical tours in the area, says he’s happy to watch this new chapter in his city’s history unfold.”It’s very exciting, I think that it is reflective of the way that the community here is gradually changing,” Goldstein says.About 6,000 Somalis live in Maine, Goldstein said, thanks to a wave of migration that began in the early 2000s.Their arrival hasn’t always been met with open arms. In 2002, the mayor of Lewiston, Maine, drew national media attention when he wrote an open letter telling Somali immigrants not to come to his city.But Dhalac says the people she’s met in Maine have been welcoming, and in recent years she’s seen more Somalis and other immigrants taking on leadership positions in the state. In the past, she says, immigrants were more hesitant to run because they were focused on making ends meet and supporting their families.”I think we were always kind of afraid to get involved. … We were waiting on somebody (else) to do something,” she said.In 2018, Dhalac got tired of waiting.

Dhalac fled Somalia in 1990, just before the country descended into civil war. After she immigrated to the United States in 1992, she says it wasn’t long before she started organizing fellow immigrants to become citizens and vote. But she’d never thought of running for office herself, until she came to a troubling realization.”No matter how important my work was, we were missing out at the decision-making tables,” Dhalac said Monday in her inaugural address. 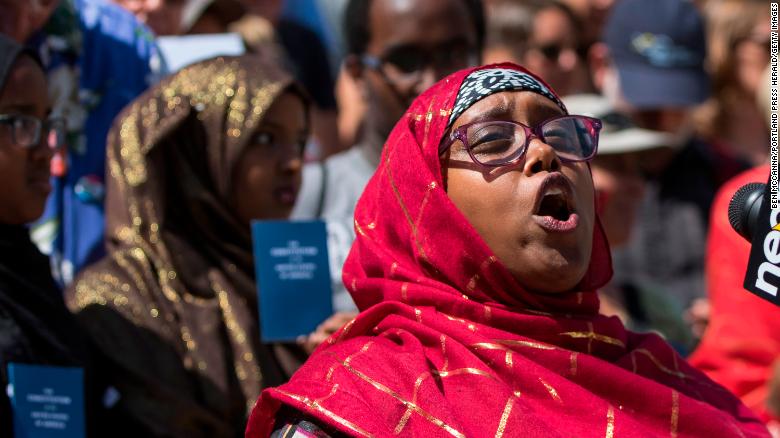 Deqa Dhalac speaks during a 2016 rally protesting comments by Donald Trump, who was then the Republican presidential nominee.After former US President Donald Trump took office, Dhalac told CNN she felt even more determined to make her voice heard. She joined protesters at a 2016 rally after Trump made comments denigrating Somali immigrants.The next year, she participated in a protest against White supremacy and drew cheers from the crowd when she declared, “I am a Muslim, Black immigrant woman, and I’m not going anywhere.”When an opening came up on the South Portland City Council, Dhalac says many people were pushing her to run. Once she got her family’s blessing, she started knocking on doors, doing what she could to connect with voters and win them over.In 2018, she ran against a local business owner and won, making history as the first African American and first Muslim elected to the council. In 2020, she ran unopposed for a second term. The city council selects from among its members who will be mayor, and in November, her colleagues unanimously supported her nomination.And on Monday, they voted to make it official. She’ll serve a one-year term.South Portland is home to about 25,000 people, making it Maine’s fourth largest city. It neighbors the larger city of Portland and is also home to the state’s largest mall and half of the Portland International Jetport.Dhalac’s major priorities for the city include improving its climate change response, increasing the availability of affordable housing and promoting diversity, equity and inclusion.Being on South Portland’s City Council isn’t a full-time job. Dhalac has a background in social work, and by day she’s the family engagement and cultural responsiveness specialist for Maine’s Department of Education. She also serves on numerous boards and is the mother of three adult children. 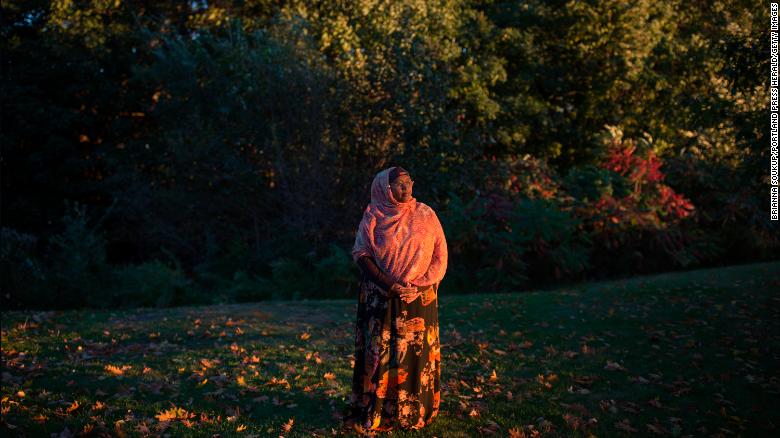 Deqa Dhalac in 2018. She encourages other immigrants to become active in their communities.But no matter how much else she has on her plate, Dhalac says she always wants members of the community to feel comfortable coming to her with questions.And they do, Dhalac says.”Why is the construction taking too long? … Why does this person have a rooster next door? You name it.”

There’s a Somali saying behind her leadership philosophy

On Monday, so many people wanted to attend Dhalac’s inauguration that organizers had to move it to a larger auditorium.Dhalac says she’s grateful to community members who could have seen her as a stranger, but welcomed her instead. And that connection should go both ways, she says.She encourages fellow immigrants to leave their bubbles, too.”We’re living in the same space, so we should build relationships together,” she says. 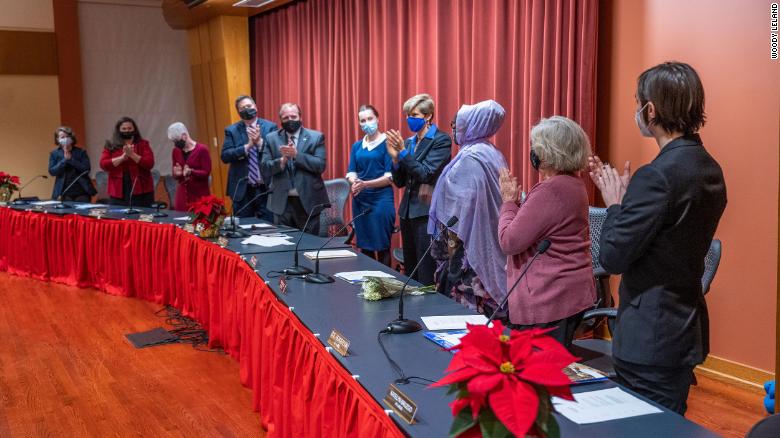 Members of South Portland’s City Council and staff give a standing ovation to Deqa Dhalac, the city’s new mayor.Dhalac points to a Somali saying: “What I am missing is within my brother or within my sister.”That, she says, means that in order to make the best decisions, leaders must consult with the community.In her inaugural address Monday, Dhalac pledged to keep an open mind as mayor “and listen with empathy, compassion, grace and understanding, so we can serve South Portland together.”The crowd gave her a standing ovation.