If (only) Amy Coney Barrett was a Muslim

Why did so many Americans condemn the new supreme court justice’s extremely conservative ideology by likening her to a Muslim?

Legal academic and writer based in Toronto.

Judge Amy Coney Barrett looks over at US President Donald Trump as he stands behind a teleprompter before Barrett is sworn in to serve as an associate justice of the US Supreme Court on the South Lawn of the White House in Washington, US, October 26, 2020 [Tom Brenner/Reuters] 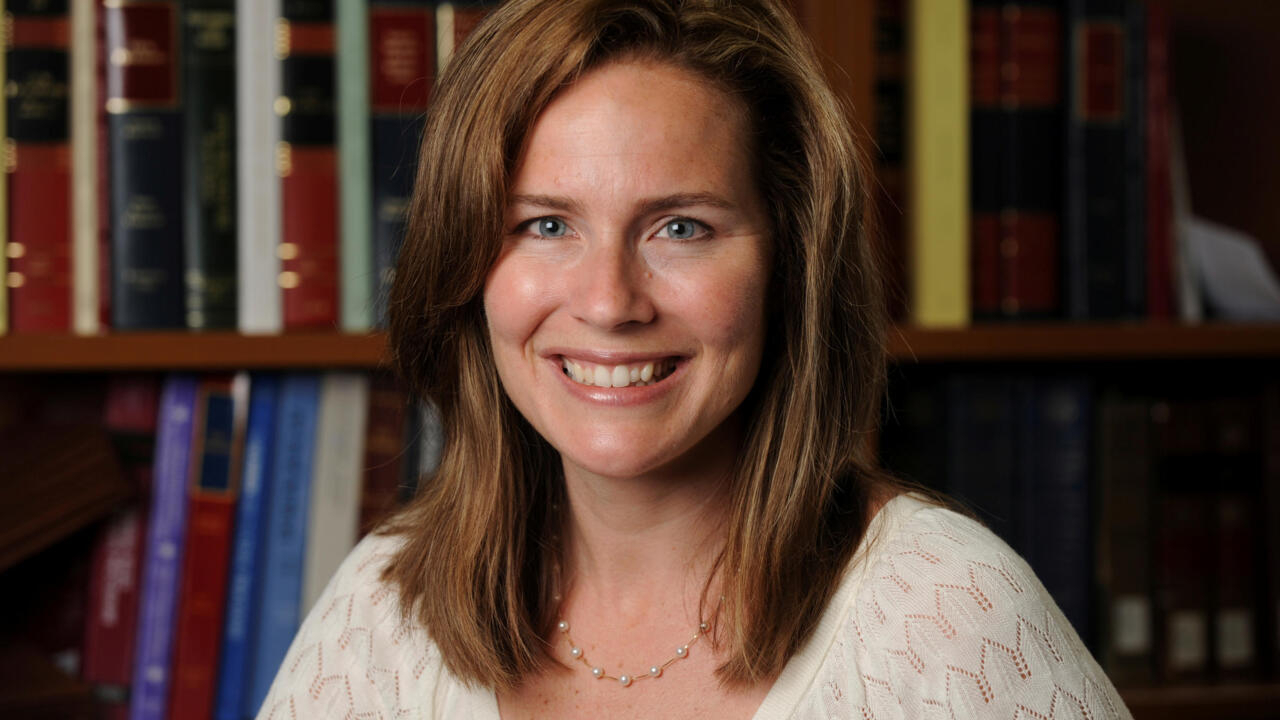 From beginning to end, Donald Trump’s presidency exposed and exploited structural flaws deeply embedded in the world’s self-proclaimed “oldest democracy” (more accurately classified as a “plutocracy,” according to some academic studies).

Such flaws include, for instance, the organisation of the electoral college with the original aim of upholding the interests of slaveholding states; the concentration of power in the hands of White propertied men (whose property derived in the first place from anti-Indigenous dispossession and genocide); the extension of abusive executive powers without judicial check; and the vulnerability of the courts to political manipulation and control.

The US Supreme Court v the vote

Yet in the dysfunctional system that produced the spectacle of the Trump presidency, it is Islam and Muslims that continue to be upheld as the paradigm of illegitimate politics. Once again, in the opposition against new Supreme Court Justice Amy Coney Barrett, a popular rhetorical tactic was put on display: Condemning her extremely conservative ideology by likening her to a Muslim.

Since the 18th century, comparisons to Muslims and Islam have been treated as the ultimate insult in American political discourse. In law, judicial despotism is often emblematised by the trope of “kadi justice” – the image of a “kadi [Muslim judge] under a tree” dispensing judgements according to individual whim, an Orientalist figment plucked not from reality but directly from the pages of 1001 Nights.

Founding Father Benjamin Franklin went so far as to wonder in 1741 whether it was considered “worse to believe in Mahomet [Muhammad] or the Devil?” Of course, the fixation on “Mahomet” conveniently distracts from the “devils” embedded in the US’s own nationalist ideology, founded on church-sanctioned colonial genocide and enslavement.

The continuing replication of centuries-old modes of thinking would, in Muslims, be cited as a sign of stunted historical growth, one more piece of evidence that Islam remains “trapped in the past”. Yet in American politics, the demonising invocations of Islam persist, even among ostensible progressives – indicating the deep entrenchment of Islamophobic structures of thought.

Outraged about Donald Trump’s unchecked abuses of power? Denounce him as a “caliph” and his officials as “mullahs”; forget that the caliph, in Islamic legal theory, was not considered above the rule of law.

Infuriated by Trump’s regressive policies? Accuse him of waging a “jihad,” on everything from clean energy to immigration to Obamacare to absentee ballots. Funnily enough, the word crusade – which unlike “jihad” actually does mean “holy war” – is frequently used to connote something commendable; while the suggestion that “jihad”, literally “struggle,” might have any positive meaning elicits outrage.

To label these as caricatures of Islam would be a misnomer since caricature suggests a core of truth that is exaggerated. Rather, they are projections: Displacements of one’s own negative features and anxieties onto a denigrated other.

As the confirmation of Justice Barrett to the Supreme Court affirms, the characteristics commonly attributed to the Islamic legal tradition – its alleged irrationality, ideological rigidity, and subservience to authoritarian power – are in fact reflective of the American system itself.

While Muslim jurists were historically independent of the state, judges in the US are political appointees – a reality emphasised by the nakedly partisan political turf war of Supreme Court placements. Justice Barrett has been rammed through onto the bench with 52 Republican votes but zero Democratic votes; previous Trump-nominated Justices Brett Kavanaugh and Neil Gorsuch were backed by similarly one-sided Republican support.

The result is a court deeply polarised along ideological lines. Justices increasingly engage in “forms of judicial behaviour [that] constitute advocacy, rather than judging”, according to a 2019 study from Northwestern and Loyola Law Schools.

Republican presidents select ever-more-radical conservative judges, and Democratic presidents more centrist-to-liberal judges (although the frequent categorisation of Obama, droner- and deporter-in-chief, as a “liberal” indicates how hollow that descriptor has become). Muslim rulers like 13th-century Mamluk Sultan Baybars, in contrast, ensured space for the operation of multiple schools of law – legal pluralism being understood as valuable in and of itself, to offset the inescapable fallibility and contingency of human reasoning.

The combination of juridicial independence and pluralism enabled Muslims and non-Muslims to exert some agency in choosing the school of legal thought that best met their needs – a form of “sharia” development from below. That is until colonial powers codified monolithic law and imposed draconian interpretations, such as Wahhabism, originally rejected by Muslim scholars and communities. As on the US Supreme Court, retrograde ideologies have been entrenched not by popular will but by sheer political force.

Even before Barrett’s appointment, the Court’s pattern of prostration at the altar of corporate and political power was blatantly apparent. Since 2006, the Chamber of Commerce – the US’s largest business lobby group – has prevailed in 70 percent of Supreme Court cases in which it has filed a brief.

Constitutional provisions meant to guarantee legal equality for the formerly enslaved have been twisted to enshrine corporate “personhood” instead. The court has made it easier for corporations to influence elections, but more difficult for the marginalised to vote; easier to criminalise peaceful speech as “terrorism”, but more difficult to hold cops who kill to account; easier for the White House to wield war powers, but more difficult for the victims of US war crimes to access the courts. It has shielded corporations from legal consequences for international human rights violations while permitting migrants to be indefinitely detained.

Judges like Barrett’s mentor Justice Antonin Scalia have cloaked oppressive decisions in the mantle of “textualism” and “originalism”, claiming they were bound by the original meaning of legal texts. Except, notably, when the original meaning conflicts with the desired outcome – whether eviscerating anti-racism measures, expanding gun rights, or ensuring their party’s candidate is declared the election winner – in which case their originalist and textualist methodologies have been inconsistently applied or quietly discarded.

However, as Islamic legal history shows, textualism is not necessarily synonymous with regressivism. The Zahiri and Hanbali schools often characterised as the most textualist adopted certain positions that would today be considered more “liberal” or “progressive”. For example, Zahiris like 11th-century jurist Ibn Hazm rejected harsh punishments for “sodomy” since they were not specified in the Quran, and Hanbali jurists provided women with greater contractual freedom in marriage and prevented the powerful from escaping criminal sanction.

Perhaps “kadi justice” should instead be called “Scalia justice”.

Justice Barrett now joins the cadre of conservative Supreme Court judges anointed by the Federalist Society, the ultra-right-wing legal organisation on a crusade – not a “jihad” – to remake the US judicial landscape.

Hiding behind the unravelling fiction of the separation of law and politics, Barrett adamantly refused to answer questions about her legal positions during her Senate confirmation hearings. But her judicial record speaks for itself: 76 percent in favour of corporations, 86 percent in favour of police, 85 percent against victims claiming discrimination, and 88 percent against immigrants.

The millions of dollars of “dark money” pumped by the Federalist Society into influencing judicial nominations and subverting state judicial elections have been paying off. With Barrett, six of the nine sitting justices on the Supreme Court are members of the Society, and all but eight of Trump’s 51 appellate court appointments have connections to it. Many of these judges will still be on the bench decades after Trump’s presidency is a distant American nightmare. The effects are already evident: Trump-appointed judges proved themselves instrumental in exacerbating voter suppression leading up to the election.

In the Federalist Society’s legal journal, it is asserted that “the Islamic law of the Middle East is the antithesis of Western law”, a quote attributed to former US Supreme Court Justice Robert Jackson. But by de-contextualising Justice Jackson’s words, his original meaning – that it is precisely because the Islamic legal tradition differs from America’s that it should be a source of insight and inspiration – is completely reversed. (So much for the Society’s stated commitment to originalism.)

“We should abandon the smug belief that the Muslim experience has nothing to teach us,” Justice Jackson wrote. “We may find divergence in legal experience as instructive as parallelism.”

Instead of reducing Islam to an object of derision, we should be anxious to learn from its history of legal pluralism and independence of jurists from the state.

Instead of fearing that Amy Coney Barrett is like a Muslim, we might hope she will be more like a Muslim – specifically, like the pre-modern Muslim jurists who fiercely refused to serve as pawns of political rulers and issued legal opinions checking power’s abuse.

As Justice Jackson urged, “It is time that we stopped thinking of ourselves as the only peoples in the world who love justice or who understand what justice is.” But the toxic combination of American exceptionalism and legal Orientalism ensures Islam is seen as a benchmark of barbarism, never a model to be emulated – to the detriment of Islamic and American legal traditions alike.

The views expressed in this article are the author’s own and do not necessarily reflect Al Jazeera’s editorial stance.