Erik Prince’s wars – Blackwater is back 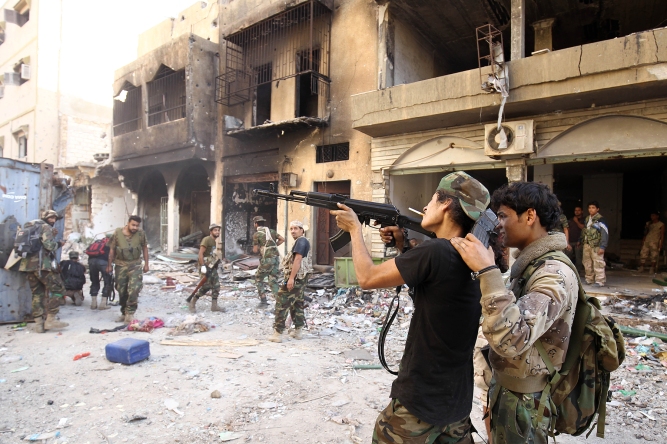 The Blackwater founder wants to bring back his company’s glory days — and he’s campaigning for Donald Trump’s help to do it. But he’s haunted by past failures and is facing questions about a mercenary fiasco in Libya

In the spring of 2019, Khalifa Haftar went to a cafe in Cairo to plot a coup. At the meeting, the Libyan general was shown an $80 million plan to overthrow Libya’s U.N.-recognized government. In a PowerPoint presentation viewed by Rolling Stone, Haftar, a warlord with a power base in the eastern Libyan city of Benghazi, saw plans for an operation that would use two Cobra H1 attack helicopters, mounted with 20mm rotary machine guns and crewed by foreign mercenaries, to swoop down and kill or capture 11 of Haftar’s political enemies. The plan would inject the soldiers of fortune into a nearly decade-old civil war that — fueled by internal instability and foreign meddling in the oil-rich North African nation — has killed thousands of Libyans and displaced many times more. The general gave the operation the green light.

By June 18th, 2019, the operation, named “Project Opus,” was in the final stages of planning, as the mercenaries and their backers attempted to assemble the equipment Haftar had been promised. But they hit a snag when the Kingdom of Jordan refused to sell military helicopters to the group. The mercenaries’ cover story was that they were headed to Libya to support energy-development projects, but Jordanian military officials had grown suspicious because of the equipment being stockpiled.

Professional mercenaries pride themselves on discretion, but this group’s tradecraft was laughable. A former Australian Air Force pilot sent to Jordan to inspect the helicopters identified himself as “Gene Rynack.” The code name was a nod to “Gene Ryack,” the fictional arms-dealer-turned-heroin-smuggler in Air America, a film about private CIA aviation contractors during the Vietnam War. (Think of a spy with the cover name “James Bonde.”) Rynack — whose real name is Christiaan “Serge” Durrant — suggested to Jordanian officials that he had clearances from “everywhere,” effectively attempting to bluff them into believing he had the approval of the U.S. Central Intelligence Agency. Suspicious Jordanian officials dug deeper and found that the operation was a private one that no country had officially sanctioned, and the sale never went through.

Lacking the Jordanian choppers, the mercenaries and their backers scrambled to find replacements, which included trying to buy equipment from private sources. “Opus are now executing their contingency plan1 for non-government support,” a member of Project Opus wrote in a June 18th, 2019, communiqué seen by Rolling Stone. “This places considerable legal risk on Opus and is beyond the scope of the agreed contract.”

The scramble for new aircraft proved at least partially unsuccessful, and when the mercenaries arrived in Libya, they failed to deliver the military equipment their contract called for. Haftar was furious. The mercenaries — a team of a dozen South Africans, five Brits, two Australians, and one American — feared for their lives and fled the country, hopping into inflatable speedboats for a desperate, 18-hour, 350-mile journey across the Mediterranean to Malta. Police detained them on arrival.

The failed Project Opus has since become the subject of a United Nations investigation, which includes a detailed and damning portrait in a 61-page report issued in June. This account of the failed operation in Libya is based on that report, which Rolling Stone obtained.

Still, much remains unknown about the mission. Who was putting up the funds to back Haftar’s attempted overthrow? Who was organizing the mission outside of Libya? And who, approached by a group of mercenaries claiming they were supporting “energy development” projects in a war-torn country, was willing to sell deadly weapons into a nation already consumed by violence?

U.N. investigators are struggling to make sense of who was attempting to get Haftar the personnel and equipment for his planned strike. A complex shell of at least 10 companies in four countries “increased the opacity of the procurement operations and attempted to disguise the identity of the overall planners,” the U.N. panel wrote. But when the mercenaries scrambled to find private sellers for the aircraft Jordan wouldn’t provide, they left a trail of clues about how the operation came together. And a lot of those clues point in the direction of Erik Prince.

Erik Prince declined repeated requests to comment for this story, including questions about whether he was involved in any way with Project Opus. Prince’s attorney, Matthew Schwartz, of Boies Schiller Flexner LLP, engaged in extensive off-the-record discussions with Rolling Stone over the course of three weeks. He ultimately declined to provide on-the-record responses to Rolling Stone’s inquiries.