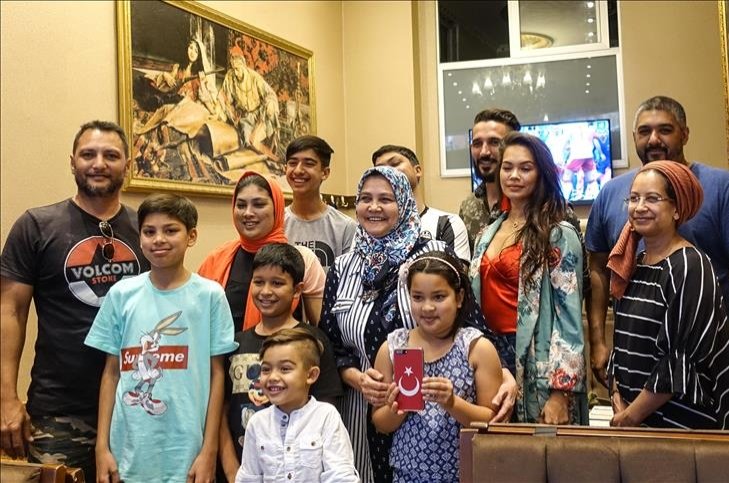 Fifteen South African descendants of Ottoman scholar Abu Bakr Efendi (Ebu Bekir Efendi), who was sent at the request of the British Empire to the Cape of Good Hope in 1862 to teach Islamic thought and culture to the Muslim community, became Turkish citizens with a presidential decree on Aug. 20, following their applications.

“We are proud and elated to be able to witness the compensation of a rift that lasted over 100 years and to duly commemorate Abu Bakr Efendi, who established the foundations of the strong ties between the Muslims of Turkey and South Africa,” the Turkish ambassador to South Africa, Elif Çomoğlu Ülgen, said on Twitter Wednesday. She added that the first group of new citizens had visited the embassy to apply for their Turkish ID cards and passports.

Fourteen of the scholar’s descendants had traced their grandfather and their roots in Turkish lands before. They visited Turkey’s eastern Erzurum province and then Istanbul, where their grandfather had lived, in 2017 and 2018.

Abu Bakr Efendi was originally from the Ottoman Empire’s Shahrizor Eyalet, covering the area of present-day Iraqi Kurdistan. Receiving his primary education in a madrassa in this eyalet, he went to Istanbul following the death of his father. In Istanbul, he continued his education for five years. Abu Bakr returned to Baghdad to complete his schooling and moved to Erzurum, where his family had migrated and settled. In 1862, he went to Istanbul to ask for the government’s help for the trouble his people experienced in Erzurum due to a famine. During this visit, he was assigned by the government to teach religious lessons to the Muslims in the Cape of Good Hope.

In the 18th century, when the rivalry between the colonial states was at its highest, around 3 million Muslims were brought by the Dutch from the East Indies island of Java as prisoners to South Africa. These people were the first Muslims to arrive in the Cape of Good Hope. Although they settled in South Africa, they were forced to live in isolation from their mother tongue, religion and traditions, which led to the emergence of different, conflicting groups. The lack of a knowledgeable religious scholar and the rise of superstitions triggered the conflicts. When South Africa came under British rule, this situation alarmed the British administration.

Tasked with teaching Islamic thought and culture and resolving religious and social conflicts among Muslim communities in the Cape of Good Hope, Abu Bakr Efendi left Istanbul on Sept. 3, 1862, and went to London via Paris, where he contacted British Foreign Ministry officials. After two months in London, he sailed from Liverpool, arriving at the Cape of Good Hope on Jan. 17, 1863.

Welcomed with great interest by the British governor-general in the region and the local Muslims, Abu Bakr devoted his life to the religious education of the locals. Only 15 days after arriving in the Cape of Good Hope, he established a school in the city and enrolled more than 300 students in the school within 20 days. He taught the Quran along with the Arabic and Turkish languages and also read religious books in his classes.

His efforts were not limited to the education of children alone. He learned English and local Dutch – a mix of Dutch and Malay – in order to communicate with the people more effectively. He also delivered sermons to the people and went to help Muslims in the surrounding provinces. He translated many notable religious books into the local languages that he had rapidly learned. Abu Bakr also started to write books in Arabic and Dutch. Among them, the most important one was “Beyanü’d-din” (“The Exposition of the Religion”). As the oldest and the most comprehensive religious work written and published in the local language of the region, “Beyanü’d-din” attracted the attention of Orientalists and was translated into English by Mia Brandel-Syrier as “The Religious Duties of Islam as Taught and Explained by Abu Bakr Effendi.”

The scholar married twice, first to a Dutch lady and later to the daughter of Jeremiah Cook, a relative of the famous 18th-century explorer Capt. James Cook. Having six children from his second marriage, he raised his children to follow in his footsteps. Hence, his children went on to carry out important activities in the Cape of Good Hope, like their father.

After working to share Islam in its true sense for decades, Abu Bakr passed away on Aug. 29, 1880, in the Cape of Good Hope and left a rich cultural legacy behind, along with many mosques and schools.