‘Walking in the Lord’s footsteps’ in Jerusalem’s Holy Sepulchre

OCCUPIED JERUSALEM — It is 3 o’clock in the morning and Artak Tadevosyan is wafting incense through the corridors of Jerusalem’s Church of the Holy Sepulchre, the site where Christians believe Jesus Christ was crucified and buried.

“Walking in the Lord’s footsteps, really, you have feelings that cannot be explained,” said the 26-year-old Armenian Orthodox cleric. “We don’t see it as stone, all these are holy places for us.”

The Holy Sepulchre lies in Jerusalem’s Old City. A church was first built there in the 4th century under Constantine the Great, the Roman emperor who converted to Christianity.

Today, the Greek Orthodox, Armenian Orthodox and Roman Catholic churches share custody of the building, and tensions sometimes run high over who controls what.

Other denominations also hold services there, in languages including Latin, Arabic, Aramaic, Amharic and Ge’ez.

At night the building falls silent. Muslim families have long held the door key, because of the tensions between the Christian clergy.

In the Greek Orthodox Patriarchate nearby, His Beatitude Theophilos III, the Patriarch of Jerusalem, said he feels deep reverence for the church.

“For the Christian world the Holy Sepulchre is the heart of Jerusalem and the world,” he said during preparations for the Orthodox Christmas on Sunday.

“Why? Because this particular place, which is the rock of the crucifixion and the rock of the tomb, or the burial site, of Jesus Christ, has been watered, and therefore blessed, by the blood of The Righteous One.” 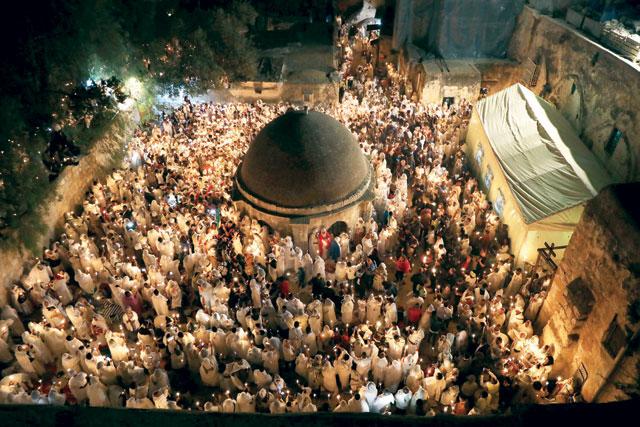 Ethiopian Orthodox worshippers hold candles during the Holy Fire ceremony at the Ethiopian section of the Church of the Holy Sepulchre in Jerusalem’s Old City, on April 7, 2018 (Reuters photo)