Playing the Islamic card ahead of elections, again?: The Jakarta Post

In its editorial, the paper shares its concern over election campaigns building up along sectarian lines, instead of candidate track records.
JAKARTA (THE JAKARTA POST/ASIA NEWS NETWORK) – The major thoroughfares in the heart of the capital were closed on Sunday, until mid-afternoon, as hundreds of thousands of Muslims rallied in a “reunion” of participants of the massive protest of Dec 2, 2016.
The “212 Rally Alumni” passed off peacefully despite some security fears.

And now, the demands have expanded to directives for the upcoming April 2019 elections, i.e. not to elect presidential or legislative candidates who supported Ahok.

The rally was thus part of the campaign by the movement called #2019GantiPresiden (2019ChangePresident), as incumbent President Joko “Jokowi” Widodo, like Ahok, is supported by the ruling Indonesian Democratic Party of Struggle (PDI-P) and its allies.

Therefore, worries remain ahead of the national elections that the races will again be more pronounced along sectarian lines, rather than based on candidates’ track records and their proposals for addressing society’s needs.

This is not unlike other countries, but poor law enforcement adds to doubts that the nation will remain secure, especially for minorities.
Therefore, the government and all candidates must prove they can rein in campaigners and supporters who raise the religious banner as a rallying point.

Some analysts dismiss the potential of Islamic politics gaining the upper hand with a victory by Prabowo, on the grounds that the movement lacks financial clout for the foreseeable future.

Further, several leading “alumni” of the first 212 have switched to the camp of President Jokowi for his second term, most notably his vice-presidential candidate Mar’uf Amin.

The rally again provided a platform for popular ulema seeking to strengthen their influence beyond their pesantren (Islamic boarding schools) and social media followers.

Among participants, ordinary residents reflected a yearning for a strong expression of Islamic solidarity.

They willingly provided lunch for fellow rally participants, many of whom came from outside town with their families.

However, many Muslims are uncomfortable with such rallies and their leaders given the political tone of imposing a conservative brand of Islam on both society and on state policy.

But citizens have every right to call on the government and all candidates to ensure there is no intensification of identity politics, even though this appears to be an easy vote-winner.

Candidates must also remember that some 80 million, (who account for) over 40 per cent of eligible voters, are “millennials” whose voting tendencies – should they decide to vote – are less predictable.

Supporters of both sides are easily drawn into bashing opponents through bullying and mockery, mostly on social media.
Others wish that even these verbal exchanges could be toned down if indeed we wish to live up to our claim to be a leading democracy in the region.

The Jakarta Post is a member of The Straits Times media partner Asia News Network, an alliance of 23 news media organisations. 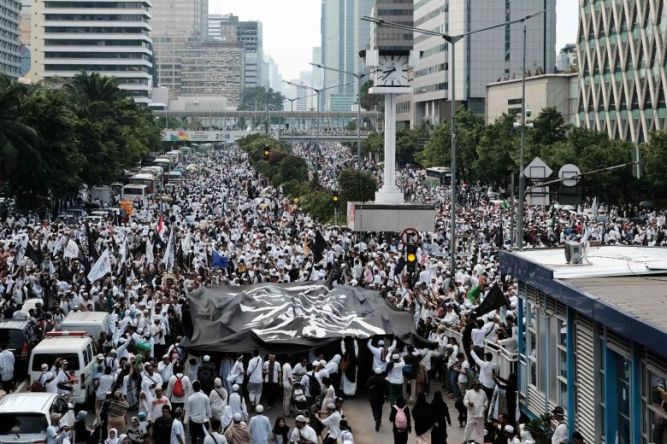 Indonesian Islamists attend a rally in Jakarta on Dec 2, 2018, to commemorate the second anniversary of a demonstration which led to the fall of Jakarta’s then Christian governor Basuki “Ahok” Tjahaja Purnama.PHOTO: AFP