WASHINGTON (RNS) — It was nearly 10 on a weeknight, but a crowd of men, women and children numbering in the hundreds surrounded the Baitur Rehman Mosque in Silver Spring, Md., chattering loudly with excitement. The group had been gathering for hours outside the sprawling building on a bucolic road outside Washington to await the arrival of its spiritual leader, the khalifa, or caliph, of the Ahmadiyya Muslim Community, who traveled last week (Oct. 16) from the United Kingdom to pray with them.

Suddenly, a caravan of black SUVs pulled up. As a sharply dressed, turbaned man emerged from a vehicle flanked by several layers of security, the masses erupted: Men and women shouted slogans and “Allahu akbar!” as the khalifa, Mirza Masroor Ahmad, walked briskly past. Dozens of children belted songs in Urdu while frantically waving flags and signs of welcome.

After Masroor Ahmad led a few brief prayers inside the mosque and disappeared into the SUV, the euphoria was over. But attendees said the experience would stay with them for much longer.

“It was amazing, because usually I just see him on TV,” said Mansur, 11, as he gripped the tiny American flag he had waved during the ceremony. Asked to describe the experience of seeing Masroor Ahmad, often called His Holiness, in person for the first time, he said, “It just felt like a lot of blessings just came shooting into me.” The scene repeated several times over the next few days as Masroor Ahmad continued his three-week whirlwind tour of the United States, visiting members of the Ahmadiyya Muslim Community and meeting with political leaders to spread a message of peace and dialogue.

Masroor Ahmad’s followers are a small subset of Islam that claims around 10 million to 20 million devotees worldwide. The group’s theology closely resembles that of most Sunni Muslims, save for an important distinction: Ahmadi Muslims believe that their founder, Mirza Ghulam Ahmad, who died in 1908, was the Mahdi of Islam, a Messiah figure prophesied to appear and usher in the end times and the peaceful triumph of Islam. Masroor Ahmad, the founder’s great-grandson, was elected in 2003 as the fifth caliph.

This belief has led to persecution from other Muslims in various parts of the world such as Pakistan, where many consider Ahmadis to be apostates — and where their current caliph, Masroor Ahmad, was raised. But the group’s centralized hierarchy under the caliph has allowed it to broadcast — literally, as the sect operates its own television stations — a unified message of peace and interfaith dialogue worldwide.

Asked by Religion News Service how Ahmadis should respond to violence or threats, from Muslims or others, Masroor Ahmad insisted that members of his community should hold fast to a message of peace that echoes the slogan plastered across many signs during his visit: “Love for all, hatred for none.” 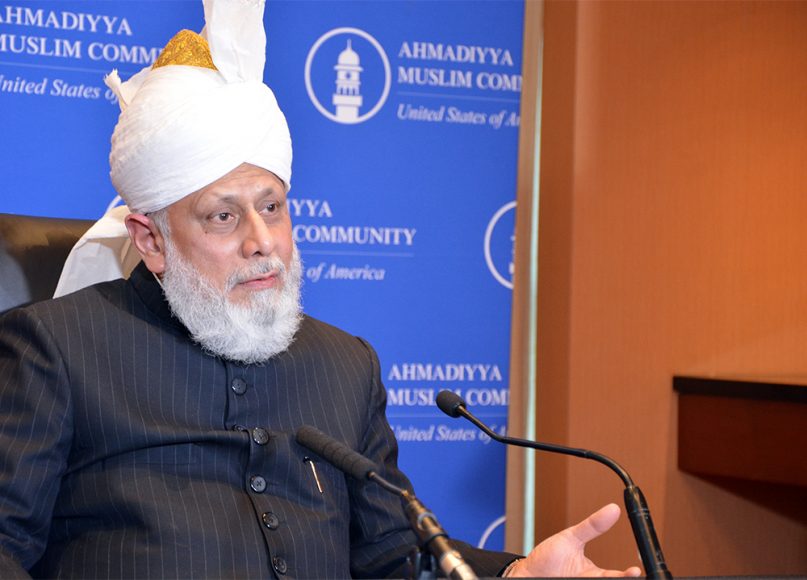 “You see, we cannot force them,” he said during a news conference in Philadelphia, referencing those who wish violence on the Ahmadi. “We are only responsible for ourselves. … We can only try to make them understand, if they understand. But the true teaching of Islam is love, peace and harmony.”

Masroor Ahmad has visited the U.S. at least three times before, in 2008, 2012 and 2013, but this latest trip is his most extensive, including stops in Philadelphia and Baltimore, where he inaugurated new mosques in each city, and Houston. Everywhere he goes he has been greeted by adoring crowds of Ahmadis.

But the caliph’s tour has also included outreach to non-Muslims. After dedicating the Philadelphia mosque, he delivered remarks to a banquet that included many non-Muslim guests and luminaries, during which Mayor Jim Kenney offered Masroor Ahmad the key to the city. In Baltimore, at another massive banquet, he met with U.S. Sen. Ben Cardin, along with local elected officials.

“Your message of peace and love is desperately needed, now more than ever before,” Cardin told the banquet crowd at the Hilton Baltimore. “And you inspire us by your presence and your words here in Baltimore, that we all can do better.”

In his speeches, Masroor Ahmad stresses the need for interfaith dialogue and cooperation and rails against isolation and “meeting only with members of our own particular community.” At the banquet in Philadelphia, he talked about how Ahmadis assisted local Jews after their cemetery was desecrated by vandals in February 2017.

“The local members of the Ahmadiyya Muslim Community went to offer their support to the Jewish community, and to stand in solidarity with them after that despicable crime,” he said. He added that the assistance was Ahmadis “merely doing what our religion has taught us,” which is to “stand shoulder to shoulder” with others “in their time of need or distress.”

In the past few years, the Ahmadiyya Muslim Community has forged political relationships with members of both major U.S. political parties. 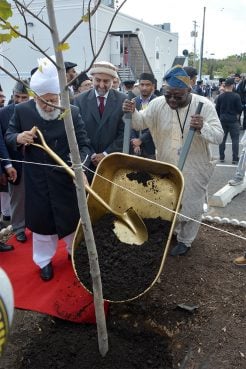 While the caliph’s visit comes just before U.S. midterm elections, a contentious political season that has seen a spike in anti-Muslim rhetoric from politicians, he took no sides, only urging his followers to elect people who are “humble” and prioritize serving others.

Indeed, humility was something of a theme during Ahmad’s visits to the Mid-Atlantic states and despite the fanfare Ahmadis were quick to put things in perspective. Basir Jamil, 25, who volunteered to provide security and other assistance in Baltimore, said that the caliph’s illustrious role didn’t distract from individual Ahmadis’ personal connection to the divine.

“Even though he’s a spiritual leader, he’s ultimately still a man,” Jamil said. “Sometimes we have to remind ourselves that what matters is God — he’s just there to guide us.”