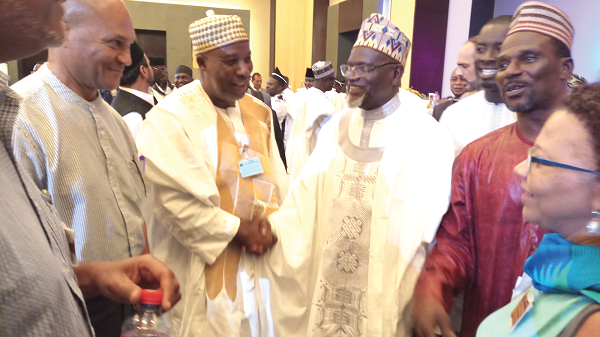 The Ahmadiyya Muslim Mission in Ghana has held its maiden international Peace Conference to inspire concerted efforts for lasting global peace and justice through the teachings of Islam.

The conference which was themed: “Peace and Global Justice”, was attended by participants from different Ghanaian and international organisations.

The Head of the Worldwide Ahmadiyya Muslim Community, Hadzrat Mirza Masroor Ahmad, whose message was read by the Ameer and Missionary of the Ahmadiyya Muslim Mission in Ghana, Maulvi Muhammad Noor Bin Salih, said the advancement of new technologies despite connecting people had affected world peace by brewing tension among different groups.Such tensions, he observed, were visible in the increased polarisation of societies that had often led to violence and bloody civil wars in some countries.

“The risks to civilisation are increasing. Weapons are being manufactured and stockpiled at an alarming rate. And this is unquestionably due to new technologies,” he said.

He called on world leaders to seek peace by acting with justice which would require showing regard for one another and fulfilling one another’s right.

“We appeal to them to look at the long-term future of the world rather than to be blinded by short-term and narrow self-interests,” he added.

The Consul General of Tuvalu in London, Sir Dr Iftikhar Ahmad Ayaz, encouraged leaders to shun corruption, promote rule of law, show sensitivity to the cause of the people and also allow religion to take it rightful place as a unifying force in establishing a society of brotherliness and mutual affection.

Those, he said, were the catalysts for the realisation of peace and justice that correlate with good governance, eradication of poverty and economic progress.

He further advocated women empowerment through education and the abandonment of cruel and primitive practices which tended to disfavour the poor and marginalised in the society.

For his part, the Dean of Academic Affairs at the Ghana Armed Forces Command and Staff College, Dr Vladimir Antwi Danso, chastised the current international systemic order for being the cause of destabilisation around the globe.

According to him, the search for peace by the international order had at different phases led to the laying down of rules through policies on how states should be governed.

However, that had oftentimes led to chaos where one state interfered with the governance process of other states without any reprimand or repercussion from international bodies, which by extension had created a vacuum for other terrorist groups to emerge.

He called on global institutions to be more independent and firm in ensuring that members who flouted the laws were dealt with.

The Ahmadiyya Africa Peace Prize, which is an award presented to an individual or organisation for the advancement of peace, was given to the Archbishop of Abuja, Cardinal John Olorunfemi Onaiyeka.

This was in recognition of his outstanding role for advancing peace between some religious and non-religious divisions in Nigeria.