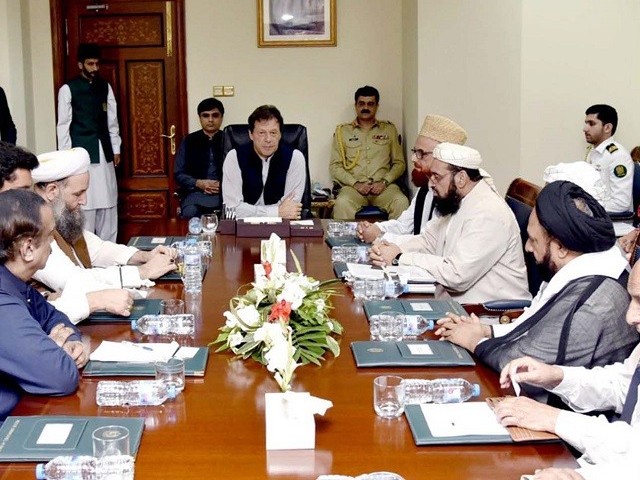 ISLAMABAD: Prime Minister Imran Khan said on Wednesday ignoring contribution made by religious seminaries in progress of society and equating them with terrorism and extremism was unjustified.

He made the remarks during his first meeting with a delegation of Ulema (clerics), who called on him at the Prime Minister Office to discuss madrassa reforms and other related issues.

The prime minister said improving the education system and curriculum was his government’s top priority.

He said presence of three different education systems were only creating divisions and promoting different cultures in the country.

He was of the view that these three systems are creating discrimination among students and isolating madrassa students.

“It is (of) paramount (importance) that we should have a uniform education system in order to achieve prosperity,” PM Imran noted.

The premier made it clear that students graduated from madrassas had equal rights to grow and prosper in society. The main objective of bringing reforms in the education sector was to end discrimination and to bring students of seminaries at par with other students, he added.

PM Imran said ignoring the role of seminaries and equating them with terrorism was not justified. He assured the Ulema that all such issues would be resolved through consultation and consensus.

The delegation of prominent clerics congratulated the prime minister over his election victory and backed his government’s reform agenda. They wished and prayed that the government may succeed in bringing positive changes in the country.

Despite tall claims, the previous government had failed to introduce necessary madrassa reforms. However, with the PTI government at the Centre, hopes of seminary students have been rekindled in this regard.

Mainstreaming of the religious seminaries was part of the 20-point National Action Plan (NAP), formulated in the wake of the deadly attack on Peshawar’s Army Public School (APS) in December 2014.