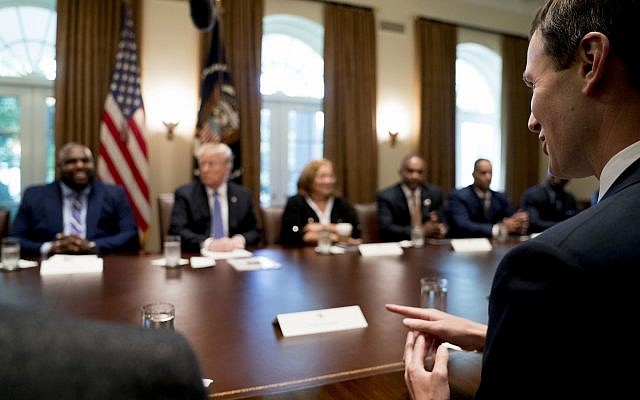 WASHINGTON — US officials say the Trump administration is staffing up a Middle East policy team at the White House in anticipation of unveiling its long awaited but largely mysterious Israeli-Palestinian peace plan.

The National Security Council last week began approaching other agencies seeking volunteers to join the team, which will work for US President Donald Trump’s Mideast peace pointmen Jared Kushner and Jason Greenblatt, according to the officials.

The team, which is being set up to organize the peace plan’s public presentation and any negotiations that may ensue, will comprise three units: one concentrating on its political and security details, one on its significant economic focus and one on strategic communications, the officials said.

The creation of a White House team is the first evidence in months that a plan is advancing. Although Trump officials have long promised the most comprehensive package ever put forward toward resolving the conflict, the emerging plan has not been described with even a small amount of detail by Kushner, Greenblatt or any other official.

Timing on the release of the plan remains undecided. The State Department, Pentagon, intelligence agencies and Congress have been asked to detail personnel to the team for six months to a year, according to the officials, who were not authorized to publicly discuss the matter and spoke on condition of anonymity.

The agencies declined to comment but an NSC official said that Kushner, Trump’s son-in-law and senior adviser, and Greenblatt, Trump’s special envoy for international negotiations, “are expanding their team and the resources available as they finalize the details and rollout strategy of the peace initiative.”