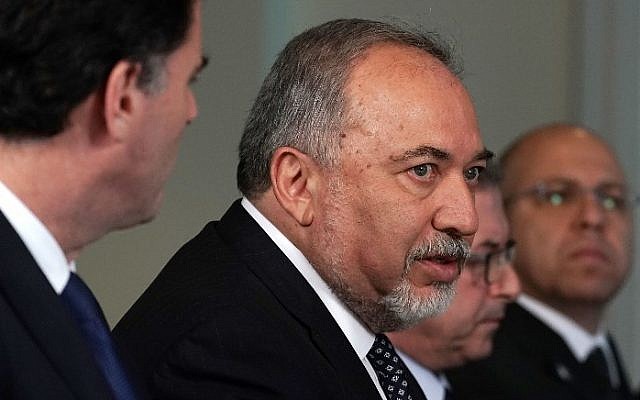 Defense Minister Avigdor Liberman speaks during a bilateral meeting with US Secretary of Defense Jim Mattis on April 26, 2018 at the Pentagon in Arlington, Virginia. (Alex Wong/Getty Images/AFP)

Asked during an interview on Hadashot TV news why Israel was losing the battle over media coverage of events in the Gaza Strip, Liberman said, “There is one Jewish state in the world. There are 57 Muslim states, who all have much bigger budgets” than Israel.

“Ultimately, the person who pays, gets to choose the music,” he said. “When you go now through all the international channels — from CNN, France 24, BBC — you’ll see that 90 percent of all advertisements come from the Muslim world.”

“We have no illusions. This is a festival of hypocrisy,” he said.

The deaths of 62 Palestinians during Monday’s violent protests along the Gaza border were met with international outrage and calls for an independent investigation of events. Hamas has subsequently admitted that 50 of the dead were members of the terror group. Three others were Islamic Jihad members. But these facts have received scant coverage in the international media.

Liberman said Israel wanted to alleviate the difficult humanitarian situation in Gaza and was taking “concrete steps” on a civil level to do so, though he would not go into details.

“There isn’t a day that we don’t sit and try to solve” Gaza’s humanitarian predicament, he said.

He claimed that there was very little true international will to provide aid to the Strip, and that “not a single international player is prepared to invest money” in rehabilitating Gaza.