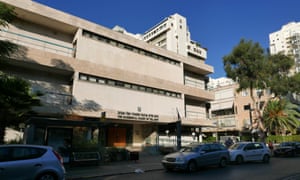 The headquarters of the chief rabbinate in Tel Aviv, which controls all matters of marriage and divorce in Israel. Photograph: Dan Perry/AP

Israeli rabbinical authorities have seized the passport of an American businessman and barred him from leaving the country for more than a year – claiming he is responsible for his son’s refusal to grant his wife a divorce.

In a first ruling of its kind, Israel’s rabbinical court system has dramatically extended its reach by punishing a parent for his son’s actions in a bid to solve a bitter divorce dispute.

Under millennia-old Jewish law, a woman needs the approval of her husband to dissolve a marriage. In Israel, where all marriages are subject to religious law, this norm has left thousands of women in legal limbo due to husbands who refuse to grant divorces.

In recent decades, the rabbinical courts have gained the authority to impose various sanctions against recalcitrant husbands. But legal experts say that never before have they punished a husband’s parent – in this case claiming that the father is helping his son live a life of luxury in the US while leaving his estranged wife languishing back in Israel.

“It’s really shameful that this is the only way to solve the terrible plight of this miserable woman, by incarcerating or confiscating the passport of her father-in-law. There should definitely be an alternative way,” said Ruth Halperin-Kaddari, founding director of the Rackman Centre for the Advancement of the Status of Women at Israel’s Bar-Ilan University.

Israel’s state-sanctioned rabbinate oversees many aspects of daily life for the Jewish majority, including marriage and divorce. There are no civil marriages, meaning that couples must marry or divorce according to religious law – or travel abroad for a civil ceremony. Some women’s rights advocates say the religious laws stem from a patriarchal tradition and put the woman at a disadvantage. Christians and Muslims marry according to their own religious customs.

Among the most contentious of Jewish rites is the one that grants men disproportionate power in divorce. Women who are not granted divorces are often forced to relinquish their child custody rights or alimony payments to convince husbands to accede.

Rabbinical judges are allowed to use sanctions against husbands who refuse to grant a “gett”, the Jewish term for a divorce. The rabbinical court, a recognised legal body in Israel, has frozen bank accounts and cancelled driver’s licences among other means to pressure husbands in Israel, but those outside the country are largely out of their reach.

Women’s rights advocates say sanctions are used in only a tiny fraction of cases and that they should be employed more often. Shai Doron, a spokesman for the rabbinical courts, said judges use “all the tools at their disposal” to solve divorce cases.

The rabbinical court said the case in question was one of the most difficult it has faced in light of the dire situation of the wife, who suffered a stroke and became partially paralysed shortly before requesting a divorce a decade ago. Publication of the names of those involved has been prevented.

According to the court documents, the wife suffered the stroke on a visit to Israel with her husband in 2005. Shortly after, the husband returned to the US, where he remains. His wife and their two children stayed in Israel and she became an Israeli citizen. The court says the husband has ignored her request and a court ruling for a divorce as well as another ruling demanding he pay alimony.

The father is in his late 60s and according to court documents is a wealthy member of New York’s Hasidic community who runs a real estate company. He was in Israel last year on a family visit when he was summoned to the court, told to hand in his and his wife’s passports and barred from leaving the country. He was later sentenced to 30 days in prison for contempt of court.

The rabbinical court argues that by providing his son with a job and stipend, the father is responsible for his son’s intransigence. His lawyers argue he is being used as leverage to pressure his son and are appealing to the supreme court.

“One of the most basic tenets of justice is that a person carries his own sins and is not punished for the sins of others,” said a statement from his lawyers. “The father has no control over his son.”

According to the father’s lawyers, the father and son are estranged, and despite his best efforts, he has been unable to force him to grant a divorce. The statement said the father has fired the son from his job and pleaded with religious leaders to convince him.

Osnat Sharon, the wife’s lawyer, said her client had endured an “intensive and Sisyphean” process of rehabilitation that will not be complete until she is allowed to move on.

“She is not yet 40. She has her entire life ahead of her,” said Sharon, who also serves as legal adviser to Yad L’Isha, an aid centre for women who are refused divorces. “Part of her rehabilitation is to find a new relationship and she can’t do that.”

The husband did not respond to numerous phone calls by AP seeking interviews. He told Israeli Channel 2 TV in a report from August that he would approve the divorce if his children returned to the US.

Under Israeli law, the court has the jurisdiction to take the measures it has taken. In documents obtained by the AP, the court rejected a US embassy request to have the passports returned, telling the embassy that its involvement in the case was “unacceptable and intolerable”. The embassy said it has provided the father with assistance but declined to comment further.

The New York-based Organisation for the Resolution of Agunot, which works to help solve Jewish divorce disputes, has followed the case. Its executive director, Rabbi Jeremy Stern, said the husband, who has a girlfriend, splits his time between a home in Brooklyn and “an exquisite apartment” in a luxury Trump residence near Miami, both owned by his parents.

“Everything that we know about this indicates that it is the parents who are directly supporting, enabling, aiding and abetting the husband’s recalcitrance,” Stern said. “Let [the father] kick him out on the street and let him know that he can’t live [in his homes] until he gives a gett.”