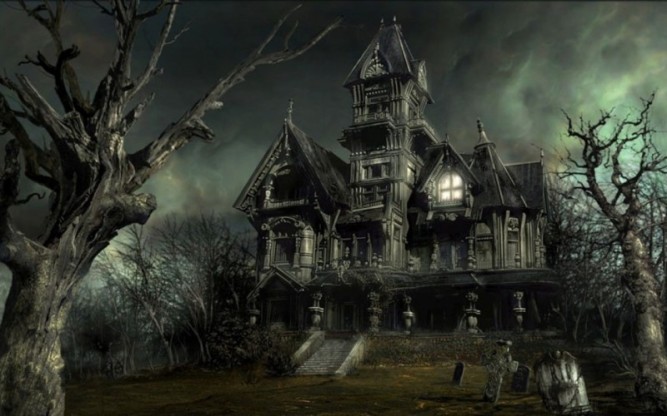 Our haunted house? Suggested reading: Exorcism: The Muslim Times (TMT) Preserving information for the Posterity and How the Fields of Neurology and Psychology Started in the 19th Century, Out of Religious Dogma

I had returned to a job in Rochester, NY after working in New Jersey for a year or so.

We had just moved into a new house about a month ago. One day as I walked into the house my wife said, “We have ghosts in our house.”

I stopped walking, stunned; my wife is not prone to exaggeration and would not say anything like this unless it was serious. She must have experienced something strange. As Muslims, we did not believe in the “ghosts” like commonly believed by many people of other faiths. The Holy Quran talks about Jinn and Devil but not ghosts. We do have a firm belief in souls and spirits. We all have one. The Holy Quran describes that the soul is severed permanently from the physical body after death, never to return back to this world in any shape or form.

“I hear footsteps upstairs and in the basement. I see shadows hurrying upstairs,” my wife continued to explain.

“Perhaps these are sounds of wind blowing?” I suggested, knowing very well she was not going to buy it. She looked very scared and my half hearted explanation did not give her any consolation. As she explained her experience in greater detail, showing me that somebody had rushed from our two story foyer into the kitchen area and then taken the staircase into the basement. As I tried new explanations, to console her, I felt some fear in my heart also and noted that I was becoming perplexed myself.

“Ask your daughter, if you do not believe me, she heard the footsteps too.” She said, “And she has also seen the shadows a few times.”

I decided to stop talking and went to my study. As I was checking my email, I heard some calculated foot steps and then a brisk walk, as if someone was walking in the basement. I rushed downstairs, two flights of stairs, but no one was there.

I looked for anything that could have made the noise: a mouse, a bird, or a squirrel. Nothing was seen in our otherwise clean and orderly basement. My wife has the habit of keeping our house in an exceptionally clean and organized fashion, even the basement. With regular cleaning, vacuuming, and spraying, finding a bug or a mouse in the basement was out of question.
“I have not heard anything before today!” I said to myself, trying to solve the puzzle, but I was still perplexed.  I could not help it.

“I am going to Wegman’s for groceries,” my wife said closing the garage door as she went out. I had finished checking my emails, and decided not to let “ghosts” bother my relaxation time as I sat down to watch CNN. I began to doze in my chair and was startled awake by a sound of someone going upstairs. I got up and went upstairs immediately. My daughter was in her room ironing her clothes.

“Did you hear someone walking upstairs?” I asked her.

“No!” she answered, while taking the headphones off her ears.

I came down and went back to CNN headlines.

Over the next few days, we did not hear any more footsteps, nor did my wife see any more shadows. Then one day she heard the noises again. After few days I too started to hear the noises and even saw shadows and silhouettes of human figures moving and going upstairs and downstairs, but never directly, always in peripheral field of vision. If I sensed a shadow to the side and turned to look at it directly, it would not be there, and that felt strange.
At least I was never sure, did I see something or only imagined it?

I could not reach a conviction if it was make belief or something real was going on. I never had a solid proof of presence of ghosts, and it remained to be nothing more than strange experiences.

Over the next few months, it happened sporadically, not only to us but at times to others visiting us as well. Once, my wife and her friend were having a cup of tea sitting in kitchen, around a dining table. Her friend suddenly said to my wife, “someone just went past the bathroom to the garage?” My wife politely told her that other than the two of them, no one else was home.

And just like that, it went on for a while.

We all had similar experiences several times. Only difference being, we started hearing sounds in the walls also. As Muslims we did not believe in the existence of the ghosts. We talked about it at the dinner table, but could not come up with any explanation, but always believing: There must be a natural explanation for all this!

It was a rainy night, it had just stopped raining and now there was a dull. I was sleepy and tired after a rough day at work.

We had been in this house for five months.  The on going suspense was taking a toll on our nerves.

I went to my bedroom turned the lights off and as I was pulling the curtains I noted, it was pitch dark outside.

My wife had told me that she is checking on our granddaughter in the other bedroom, and had decided to sleep in the baby’s room.

I was alone in my bed.

I was afraid that even though I am tired, I may have a sleepless night.

But, to my surprise, soon, I was sound asleep.  It seemed like a dream. I felt a big black shadow of a cloud pass over my face.

I suddenly woke up. I was sweaty and my heart was fluttering fast.  In a state of uncertainty and shock I jumped from my bed and turned the lights on. I saw the “ghost” as it flew from one end of the room to the other with wings flapping and making noises.

It was a bat. Jet black! And over a foot long wing-to-wing while flying, but sitting on the edge of the chair, looked like a small mouse.

I got a towel from the bathroom and threw it at the bat, caught it and trapped it in a plastic bag. We called the pest control and they took care of the problem.

How did the bat come into the bedroom? Pest control expert told me that the bats can squeeze through a very small opening, as small as a pencil. The bats droppings were found in the basement as well as in the attic.

The conclusions were that the bats entered the attic through small openings where the walls meet the roof, and went down to basement through the walls. They entered the bed room from the tiny opening where we had dropped lights in the ceiling.

For prevention of future entry of bats, they put a fine mesh of wire at places where the lights were in the ceiling in the bed room, and closed all the holes in the basement.

Once the bats were gone, we never heard noises, and never saw shadows of human figures.

Why were we seeing the shadows? I have thought about it several times and came to following conclusions:

We were hearing the bats noises, as they flew and moved in the walls and the basement. The human brain is a wonderful organ. It fills the gaps as needed for the continuum of the event created in the brain by noises. When the data does not exist our brain manufactures it. We heard the sounds, and the brain created corresponding images and refined the sounds for us as needed to quench the thirst of curiosity.

Magicians rely on the brain’s tendency to perceive objects as continuing in the expected direction. This tendency explains magicians’ success in fooling people with well-known tricks using strings, ropes, rings, spoons and dollar bills. For instance, research by Martinez-Conde and Macknik have shown that when you see a magician toss a coin up and down in one hand and then fake a coin throw to the other hand, spectators actually “see” the nonexistent coin flying from one hand to the other. This trick works well only when the spectator sees the coin actually being tossed up and down prior to the fake throw. Without that setup, the spectator is more likely to notice that the coin was not actually thrown from one hand to the other.

“Performing magic makes you keenly aware of how fallible peoples’ perceptions are,” notes Anthony Barnhart. He’s a professional magician and a doctoral student in cognitive psychology at Arizona State University in Tempe. By fallible, he means capable of being wrong. “So much of what you think you’re perceiving, you’re really misperceiving,” he says. That’s because your previous experiences drive so many of your perceptions. You expect things to proceed as they have in the past.

Based upon our past experience, if a particular sound is associated with a particular image, the brain will fabricate it. And that is how we were looking at shadows. Our brain was fooling us.

Pope Francis Does Believe in Demons. Do You?

Could You Get Possessed?