Jesus, Interrupted: Revealing the Hidden Contradictions in the Bible (And Why We Don’t Know About Them)

From Wikipedia, the free encyclopedia: 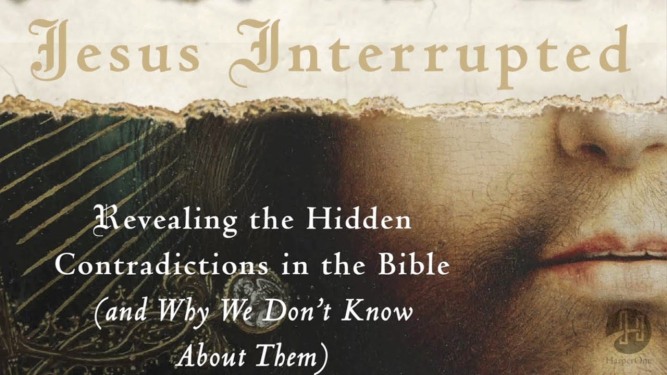 Jesus, Interrupted: Revealing the Hidden Contradictions in the Bible (And Why We Don’t Know About Them) is a book by Bart D. Ehrman, a New Testament scholar at University of North Carolina at Chapel Hill. This work includes a narrative of Ehrman’s own progression in Biblical studies and beliefs, an overview of the issues raised by scholarly analysis of the Bible, details of a selection of findings from such analysis, and an exhortation regarding the importance of coming to understand the Bible more fully.

Regarding the importance of Biblical study, Ehrman says in the preface, “This kind of information is relevant not only to scholars like me, who devote their lives to serious research, but also to everyone who is interested in the Bible — whether they personally consider themselves believers or not. In my opinion this really matters. Whether you are a believer — fundamentalist, evangelical, moderate, liberal — or a nonbeliever, the Bible is the most significant book in the history of our civilization. Coming to understand what it actually is, and is not, is one of the most important intellectual endeavors that anyone in our society can embark upon.” One particular statement from early on appears to summarize the development of the subject matter that Ehrman attempts to cover in this volume: “Scholars of the Bible have made significant progress in understanding the Bible over the past two hundred years, building on archaeological discoveries, advances in our knowledge of the ancient Hebrew and Greek languages in which the book of Scripture were originally written, and deep and penetrating historical, literary, and textual analyses.”[1]

Rich Barlow of the Boston Globe,writes “…he repeatedly stresses that historical-critical study need not kill faith. And, honest scholar that he is, he admits that some of his contentions can be challenged.”[2]

The book also received a positive review from Dr. James F. McGrath, Clarence L. Goodwin Chair in New Testament Language and Literature at Butler University, Indianapolis. McGrath highly recommended the book, describing it as introducing “a wider audience to important aspects of the New Testament.” McGrath wrote that “The information Ehrman presents is not at odds with Christian faith, although it is at odds with the claims that some Christians make about the Bible,”[6] echoing Ehrman’s stated aims for the book.

Michael J. Kruger, Associate Professor of New Testament at Reformed Theological Seminary called it “a book full of ironies” and “intellectual schizophrenia,” stating that “it purports to be about unbiased history but rarely presents an opposing viewpoint; ironic that it claims to follow the scholarly consensus but breaks from it so often; ironic that it insists on the historical-critical method but then reads the gospels with a modernist, overly-literal hermeneutic; ironic that it claims no one view of early Christianity could be “right” (Walter Bauer) but then proceeds to tell us which view of early Christianity is “right;”…”[7] Similar criticisms have been voiced by Ben Witherington, Professor of New Testament at Asbury Theological Seminary describing Ehrman’s claims as “not the voice of the critical consensus on the NT. He could be called the popular voice of one particular more liberal or radical interpretation of the data.”[8] Another criticism raised, which was also raised over Misquoting Jesus, is that Ehrman implies that the information being presented is new, or groundbreaking. Bishop William H. Willimon says, “He keeps presenting this stuff as if this is wonderful new knowledge that has been kept from you backward lay people and this is the stuff your preachers don’t have the guts to tell, and I have.”[9]