At the brink of civil war

For millions, the American “dream” was always a nightmare – ancient seeds of division, discrimination and discord continue to grow a frustrated and polarised society. “RIP America, you had a good run (1776-2020)”, a recent tweet read.

#JusticeForGeorge protests and riots – across US cities – aim to echo the extant injustices America breeds. People are fed up, and the repercussions aren’t pretty. Contentious politics, racism and the loss of civil rights are pushing America to an edge fraught with danger. “Fury and Frustration in Cities Across U.S” as The New York Times reported, is the reaction of society.

In recent atrocities, the murders of Ahmaud Arbery and George Floyd have scorned the American civil rights movements of the 1950s and 1960s. Racial discrimination, disenfranchisement and racial segregation are far from over in “the land of liberty”.

The summer of 2013 had sparked the internationally recognised social media movement #BlackLivesMatter, after George Zimmerman’s acquittal for killing Taryvon Martin; a black American. Since, America’s eternal story of blatant discrimination – at times, supported by the very “institutions of freedom” – has been heart-wrenching, to say the least. The #BlackLivesMatter plea is now crossing the borders of America and reverberating across the world.

And polarisation doesn’t stop there. Armed white supremacists – whose threat is equal to ISIS according to the FBI – and forceful far-left groups continue to spread hatred and divide US society. Undertones of constant support and a patting-on-the-back attitude extreme groups receive, by the current leadership of America, ignite further fires of division. The same leadership also dishes out alienating laws, comments and ideas; spreading divergence on a larger scale. The Bill of Rights, which was meant to guarantee civil rights and liberties to every individual, is constantly dishonoured, ignored and attacked.

Frustrations continue to heap. The economic blow of Covid-19 on America, which has resulted in recession according to Oxford Economics chief US economist, Gregory Daco (and others), and record-hitting unemployment of 41 million people, leaves America extremely vulnerable to civil unrest. The Washington Post recently titled a story: “Gripped by disease, unemployment and outrage at the police, America plunges into crisis.”

As a result, society’s picture turns extremely grim. “Riot…the voice of the unheard” as Martin Luther King Jr. said, is how American society has responded to unending and crippling injustice. Civil unrest is chipping away at the peace of the country.

Four years ago, prior to the election of President Donald Trump, Peter Mansbridge was taken slightly aback during a CBC News interview when Hazrat Mirza Masroor Ahmadaa, the Fifth Khalifa of the Ahmadiyya Muslim Community, warned of “a big civil war” in America. He said that if Trump was elected and his (divisive) policies implemented, the threat of an American civil war would be imminent:

“…if he tries to implement whatever he is saying, then I fear that there’s going to be a big civil war.”

At this point, Mansbridge, with slight surprise, reconfirmed by asking, “civil war?”

“Yes of course. They will raise against the government. Because if the government takes harsh measures just to try to deny all their rights in any way, then there are so many hundreds of people. See, to create any disturbance or nonsense, a single man can even single-handedly do it…So they have to use sense.”

Since that interview, America has “plunged into crisis” as The Washington Post noted, and civil unrest continues to be rife. Though many of the policies were “senseless” enough, never to be implemented – the spirit and soul of such estranging policies however are spreading throughout America. Now, the idea of a civil war that Hazrat Khalifatul Masih V aa emphatically warned of, does not seem so far-fetched.

Solutions for civil unrest, and the plaguing worry for international peace have been clearly described by Hazrat Mirza Masroor Ahmad aa. Whether in parliaments, meetings with politicians, speeches before think-tanks and academics, letters to world leaders, peace symposiums, or hundreds of addresses to the public, Hazrat Mirza Masroor Ahmad aa echoes the teachings of the Holy Quran: Absolute justice, by both the government and populace. 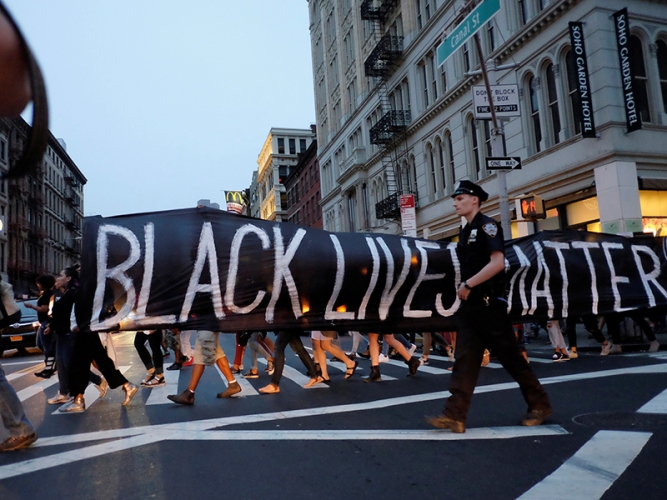 People take part in a protest against police brutality and in support of Black Lives Matter during a march in New York, on July 9, 2016. Photo courtesy of Reuters/Eduardo Munoz/File Photo
*Editors: This photo may only be republished with RNS-LUPFER-OPED, originally transmitted on October 6, 2016.

“The key requirement to fulfilling this primary goal is absolute justice and fairness in all matters. The Holy Qur’an, in Chapter 4, verse 136, has given us a golden principle and lesson, guiding us about this. It states that as a means to fulfil the requirements of justice, even if you have to bear witness and testify against yourself, your parents or your closest relatives and friends, then you must do so. This is true justice where personal interests are set aside for the common good.”

“…the representatives and ambassadors of each nation should come forward with sincerity and with a desire to support the principles of fairness and equality. We must eliminate all forms of bias and discrimination, as this is the only means to bring about peace.” (World Crisis and the Pathway to Peace, pp. 48-49)

His Holiness has said that both the government and the public should act with justice and peace. Revolting into the streets and creating violent uprisings will not bring about lasting peace, rights or liberty. Neither will oppression of civilians bring about peace.
A struggle against any inner evils, selfish desires, prejudices and wants must be waged. A revolution in our outlook on life based on the principles of absolute justice, equality and fairness will bring the change we are thirsty for.

Until the world, not just America, realises and acts on these principles, the hope for lasting peace and civil liberty will be a stretch of the imagination.