The great wall of China. Suggested reading: Who Speaks for the Flesh and Blood 1.6 Billion Breathing Muslim Souls?

Saudi Arabia, the United Arab Emirates and Egypt have been silent in the face of the mass incarceration of Muslims in Xinjiang

By Julian Borger in Washington 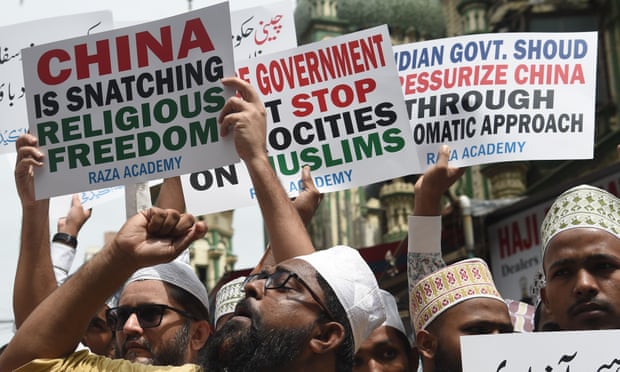 In India, Muslims protest against the Chinese government over the mass incarceration of Uighur Muslims in Xinjiang. Photograph: Punit Paranjpe/AFP/Getty Images

The US envoy on religious liberty has said he is “disappointed” at the response of governments in the Islamic world to China’s mass incarceration of Uighur Muslims, suggesting they had been threatened by Beijing.

Sam Brownback, ambassador at large for international religious freedom, said some majority-Muslim states did not want to draw attention to their own human rights record. He was hopeful that the more Muslim populations around the world heard about the imprisonment of an estimated more than 1 million Uighurs, the more they will put pressure on their governments to speak out.

The Trump administration has severely criticised Beijing for its campaign against Islam in Xinjiang province, western China, where more than two dozen mosques and Islamic shrines have been razed since 2016. But Washington, in the midst of a tense trade dispute with China, has yet to impose sanctions, and Brownback said he could not say whether any punitive measures were pending.

Meanwhile, Washington’s closest allies in the Islamic world – Saudi Arabia, the United Arab Emirates and Egypt – have been silent in the face of the mass incarceration of Muslims in Xinjiang.

At the beginning of March, the Organisation of Islamic Cooperation passed a resolution which praised China for “providing care to its Muslim citizens”.
The Saudi crown prince, Mohammed bin Salman, has also defended China’s “right to carry out anti-terrorism and counter extremism work for its national security”.

In an interview with the Guardian, Brownback said that the US has been “in discussion” with Riyadh about its response to China, but did not single out the Saudis for criticism, arguing it was an issue for the whole Islamic world.

He applauded Turkey for taking a outspoken approach, and “a number of western countries that have spoken out aggressively on this”.

But Brownback, a former Kansas governor, added: “I have been disappointed that more Islamic countries have not spoken out. I know the Chinese have been threatening them and but you don’t back down to somebody that does that. That just encourages more actions.

As Mosques Rise in Western Nations, China is Destroying Them