A British Convert to Islam: ‘I found Qur’an mother of all philosophies’

The Concept of Justice in Islam by Sir Zafrulla Khan 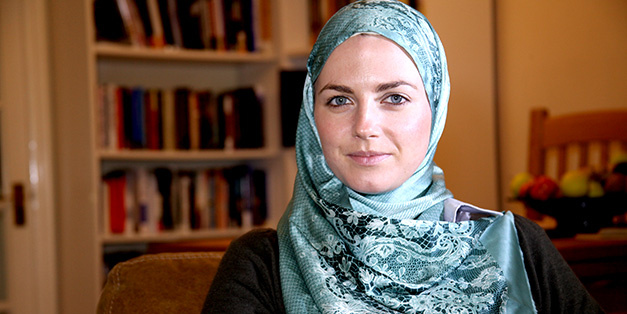 Myriam Francois-Cerrah (born Emilie François; 1983) is a Franco-British writer,[1] broadcaster and academic on issues related to Islam, France and the Middle East. She writes a monthly column for the New Statesman online and is also a regular contributor to Middle East Eye.

Francois-Cerrah currently works as a freelance journalist, in both print and broadcast media. Her articles have been featured in The Guardian,[2] The Huffington Post,[3] New Statesman,[4] Your Middle East,[5] The London Paper, Jadaliyya,[6] ABC,[7] The Daily Telegraph,[8] Salon,[9] Index on Censorship,[10] the F-Word[11] and the magazine Emel.[12]

She is the presenter of a BBC documentary on the genocide at Srebrenica,[13] which aired on BBC 1 on Monday 6 July 2015.

She is a former correspondent for the Huffington Post (2014-2015), where she broke a headline story on an exclusive 36-page document written by alleged al-Qaeda kingpin Khalid Sheikh Mohammed,.[14]

She has worked as a programme researcher at the BBC, and currently works as a freelance programme producer on Al Jazeera’s Head to Head (2013-).

She is former assistant editor and features writer at Emel magazine (2008–2009).

She has appeared on Newsnight (2009), 4thought.tv (2011),[16] BBC News (2010),[17] Crosstalk (2010), BBC Radio (2012), Sky News[18] and documentaries including Divine Women, presented by Bettany Hughes.[19] In 2012, she commented the French presidential elections for Sky News, as well as the French presidential inauguration and 2012 local elections and regularly comments on current affairs, in particular related to France or the Middle East. She has been a frequent guest on Tariq Ramadan’s television show Islam & Life broadcast by Iran’s PressTV.

A former actress, her screen career began at age 12 in Ang Lee‘s Sense and Sensibility (1995) in which she played Margaret Dashwood alongside Emma Thompson and Kate Winslet.[20][21] She went on to star in Paws (1997) alongside Nathan Cavaleri and Heath Ledger, and New Year’s Day (2000), in which she played Heather.[citation needed]

She is currently a Research Associate at SOAS, in the Department of the Languages and Cultures of the Near and Middle East where her work focuses on issues related to British Muslims, integration and racism.

She previously worked as a Research Assistant at the Center for Contemporary Arab Studies (CCAS), Georgetown University (2005-2007) in Washington DC. While undertaking her doctorate, Francois also works as an academic tutor in the Oxford University Department for Politics and International Relations, where she teaches Middle East politics.

Francois-Cerrah is studying for a PhD at Oxford University in Oriental Studies focused on Islamic political movements in Morocco.[22]

She has an MA with honours in Middle East politics from Georgetown University, and a BA from Cambridge University in Social and Political science.[citation needed]

In 2003, at 21 years old, Francois-Cerrah became a Muslim after graduating from Cambridge. At the time, she was a skeptical Roman Catholic. She rejects the use of the words “convert” or “revert” as “exclusionary”, describing herself as “just Muslim”.[23]