The Universal Declaration of Human Rights and Islam!‏

Epigraph: “If we could view Muhammad as we do any other important historical figure we would surely consider him to be one of the greatest geniuses the world has known.” (Karen Armstrong in Muhammad – A Biography of the Prophet) 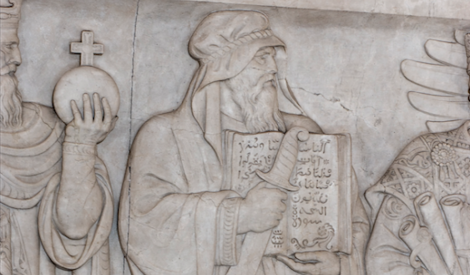 A frieze, designed by Adolph Weinman, on the north wall of the US Supreme Court depicts great lawgivers of the Middle Ages. This includes the Holy Prophet Muhammad

This examines the philosophical and historical basis of human rights. 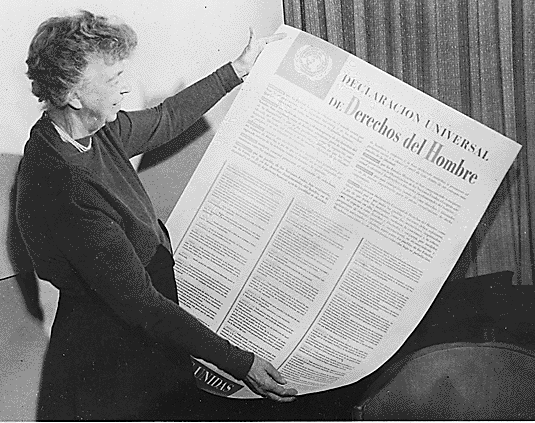 With the election of a son of a Kenyan man to the highest office in USA we see gradual perfection of the vision expressed in the words, “We hold these truths to be self-evident, that all men are created equal.”  But at the same time, suicidal bombings by terrorist, the outrageous violations of human rights in Guantanamo and Abu Ghraib, the indifference to the so called collateral damage in air bombings, have again rekindled the question as to what are the human rights and where do they come from.  The events since September 11, 2001 have jolted every citizen of the planet earth with renewed quaking and put them on a quest to look for answers.  Is life of an American more sacred than a non-American?  What if he or she is a Muslim?  Are all humans truly created equal?  Where did the words, ‘We hold these truths to be self-evident, that all men are created equal;’ come from?  To one exposed to Western media only these noble words came from the pen of President Thomas Jefferson, as he authored United States Declaration of Independence in 1776.  But a more cultured Westerner may know what Wikipedia mentions, under the heading all men are created equal, “Many of the ideas in the Declaration were borrowed from the English liberal political philosopher John Locke.”  But that is where Western scholarship ends. Locke lived in the seventeenth and eighteenth century.  Such is the dissociation of the Western writers in terms of ignoring the beauties of Islam, that they can attribute all such liberal ideas with a straight face to Western philosophers, despite the fact the Muslim literature has been replete with mention of the Holy Prophet Muhammad, saying to a crowd of more than a hundred thousand people, at the time of the final pilgrimage, an event that itself symbolizes human equality, “All of you are equal. All men, whatever nation or tribe they may belong to, and whatever station in life they may hold, are equal. Allah has made you brethren one to another, so be not divided. An Arab has no preference over a non-Arab, nor a non-Arab over an Arab; nor is a white one to be preferred to a dark one, nor a dark one to a white one.”  The whole of his sermon is recorded in history and has been more famous and cherished than President Abraham Lincoln’s Gettysburg address, in the Muslim world, over the centuries.  This is where human equality began, not only for the Muslims but for the whole of humanity!

Fast forward to World War II.  Dr.  Andrew Conway Ivy was appointed by the American Medical Association as its representative at the 1946 Nuremberg Medical Trial for Nazi doctors.  By 1945 he was probably ‘the most famous doctor in the country.’  He wrote, “Only in a moral world, a world of responsibility, can man be free and live as a human being should. Men are truly equal and free only as creatures of God, because only as the children of God and only in the sight of God and ultimate moral law are men truly equal.”  In the Nuremberg trial he struggled with the question that if man-made law is the sole source of basic human rights, why condemn the Nazi assault on Jews, Gypsies, Poles, and politi­cal enemies; and having shaken by this perplexing trial he concluded:

It took the catalyst of World War II, after millions of casualties, to propel human rights onto the world stage and into the global conscience. On December 10, 1948, the Universal Declaration of Human Rights was adopted by the 56 members of the United Nations. The vote was unanimous, although eight nations chose to abstain. Articles one and two could be considered paraphrasing, in contemporary legal terminology, of what the Prophet Muhammad had said in his address at the time of last pilgrimage, or what President Thomas Jefferson wrote more than a millennium later. Article one states, “All human beings are born free and equal in dignity and rights. They are endowed with reason and conscience and should act towards one another in a spirit of brotherhood.” As the Prophet delivered his farewell speech in the eighth year after migration to Medina, to an unprecedented large gathering, standing on the back of his camel Qaswa, he raised his hands and joined the fingers of the one hand with the fingers of the other and then said, “Even as the fingers of the two hands are equal, so are human beings equal to one another. No one has any right, any superiority to claim over another. You are as brothers.”[3][4][5]

Article two of the universal declaration announces, “Everyone is entitled to all the rights and freedoms set forth in this Declaration, without distinction of any kind, such as race, color, sex, language, religion, political or other opinion, national or social origin, property, birth or other status.” 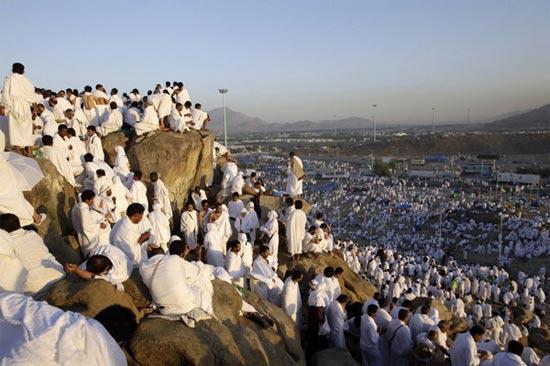 In the contemporary world the letter of the law exists but the spirit is missing. Prophet Muhammad linked the sanctity of human rights to the human appreciation of sacredness; as he addressed a sobbing and spell bound crowd of pilgrims, to the very first house ever built for remembrance of one God, “Even as this month is sacred, this land inviolate, and this day holy, so has God made the lives, property and honor of every man sacred. To take any man’s life or his property, or attack his honor, is as unjust and wrong as to violate the sacredness of this day, this month, and this territory.” The echoes of the words would reverberate, with deep emotional conviction, for centuries to come in the known world.

He wrote an excellent small book that compares all the articles of the Universal Declaration with the Quranic teachings.  Author’s deep appreciation of the law and insight into the religion of Islam and its holy scripture the Holy Quran make it a must read for every man of conscience: Islam and Human Rights by Sir Zafrullah Khan

It will not be unfair to challenge apologists of other religions especially those who are vitriolic against Islam, like Don Richardson, to show such correlation between human rights and their respective scriptures.  They may have tall claims to make but those need to be substantiated from their scriptures and the history of respective scriptures; otherwise it only amounts to hollow Monday morning quarterbacking.

George A. Makdisi (1920-2002), Professor Emeritus of Arabic & Islamic Studies at the University of Pennsylvania, writes about lack of general information about Islam, “The cultured Christian layman is aware of his religious debt to Judaism, and of his intellectual debt to Greco-Roman antiquity; but, generally speaking, he is not aware of any debt to classical Islam. The very idea may cause him to smile indulgently, or to dismiss the suggestion as unworthy of his attention. Others may be aware of some legacy from Islam.”[7][8]  In an article published in the Journal of the American Oriental Society, he argues that scholarship and learning that made the foundation of Italian Renaissance can be adequately explained only on purely Islamic-Arabic grounds.[9]

In sphere of ethnic human equality, fourteen hundred years after the Holy Prophet Muhammad declared that the white have no superiority over the black or an Arab over a non-Arab; Western science was struggling with Polygenetic theory of human origin to prove the superiority of the Caucasian race over the other races.   The Holy Quran declares, “O mankind, We have created you from a male and a female; and We have made you into tribes and sub-tribes that you may know one another.”[10] No wonder, Arnold Joseph Toynbee had to confess, “The extinction of race consciousness as between Muslims is one of the outstanding moral achievements of Islam, and in the contemporary world there is, as it happens, a crying need for the propagation of this Islamic virtue.”[11]

The world peace cannot be secured if we only pay lip service to the ideals expressed in the Universal Declaration of Human Rights. Something has to inspire the passions of not only the leaders but also the masses, to implement these ideals in real life situations. This is where the role of religion comes to play. We conclude in the words of the famous historian Arnold Toynbee pertaining to racial equality in Islam, “On two historic occasions in the past, Islam has been the sign in which an Oriental society has risen up victoriously against an Occidental intruder. … If the present situation of mankind were to precipitate a ‘race war,’ Islam might be moved to play her historic role once again.”[12]

To demonstrate to the critic that the Holy Quran, indeed, teaches Universal Brotherhood for the whole of humanity, let me quote from it in addition to the quotes that I have provided from the sermon of the Holy Prophet Muhammad above. The verse 14 of chapter 49 of the Holy Quran states:

“O mankind, We have created you from a male and a female; and We have made you into tribes and sub-tribes that you may recognize one another. Indeed, the most honorable among you, in the sight of Allah, is he who is the most righteous among you. Surely, Allah is All-knowing, All-Aware.”

Here Allah is putting all humans in one family, by starting the verse with the term, يٰۤاَيُّهَا النَّاسُ meaning ‘O mankind.’ There is mention of, or address to the believers, يٰۤاَيُّهَا الَّذِيْنَ اٰمَنُوْۤا five times before in this very chapter but when it came to this verse, Allah has chosen the broader term of يٰۤاَيُّهَا النَّاسُ ‘O mankind,’ rather than يٰۤاَيُّهَا الَّذِيْنَ اٰمَنُوْۤا ‘O those who Believe.’ There is clearly an invitation to the whole mankind that we all are a part of one human family! The Holy Quran is not building a segregated society of the believers only but a ‘Universal Brotherhood’ of the whole mankind.

[12] Arnold Joseph Toynbee. Civilization on trial: Essays. Published by Oxford University Press, 1948. Last page of the chapter: Islam the West and the Future.